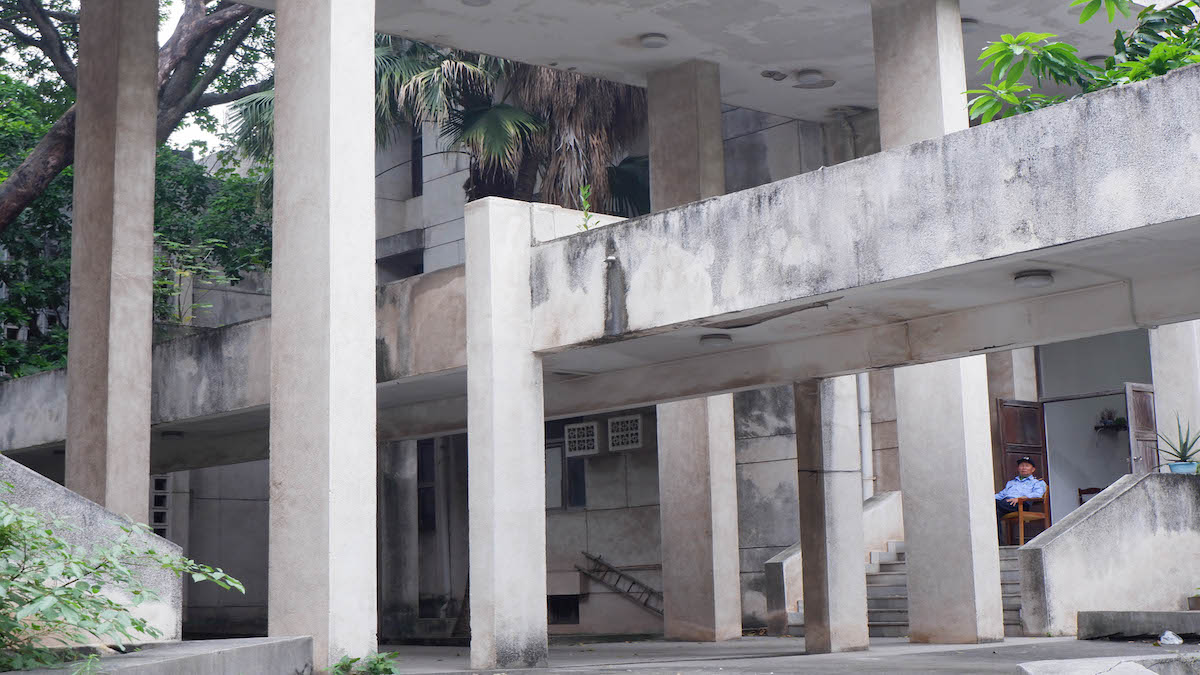 Despite Halloween being widely celebrated across the globe, Hanoi has it reservations. Nevertheless decorations generally hang, less-than subtly, outside shops purely as a way to grab-attention and attract punters. Vietnamese people aren’t really that big on Halloween. However we are often superstitious people, and can take our ghosts and ghosts stories seriously indeed. So serious that an entire building at 300 Kim Ma street has been completely abandoned, as the locals say it is haunted by evil spirits and even dead babies.

The house was built over an almost 10-year period to be the Bulgarian Embassy, but they were spooked by the building, moved location and the land was hastily given back to the Vietnamese Ministry of Foreign Affairs a couple of years ago, after too much weird stuff went down.

A few days before Halloween, Chào went on a recce to see if they if we could find any spooks and ghouls, or if people were just completely out of their minds. The brutalist building definitely had some eerie vibes looming over it. Something wasn’t quite right. Rumored to having been abandoned for around 30 years, the walls are peeling off and the dust has settled, giving the building a grayish discoloration. It’s covered in stains that could easily be dried blood. There is no sign of running electricity and other than a few stray dogs and cats is completely empty. No other forms of life abound except a few weeds growing randomly and unwantedly here and there. It’s creepy as hell.

Some say that the building used to be the site of a cemetery or a temple, and that the spirits of people past still linger around grounds. Others insist that they have heard the cries of a baby screaming from the building late into the night. One story tells of how a former guard of the building had his bed stand up sideways during the middle of the night, like something out of a bad poltergeist movie. There is even a viral image of a man standing in front of the building, with a ghostly figure resembling a woman faintly languishing behind him.

In the early spring of 2009, the day before Valentine’s Day, there was a murder outside the building. A man was found in a Lexus covered in blood. His throat had been slit by an enraged jilted girlfriend. Another tale goes that a Bulgarian secretary was suddenly paralyzed after investigating strange noises in the building.

“That place? You want ghosts to kidnap you or what?”

“Many people didn’t believe the stories were true, and so many businesses have tried to set up their companies here,” says a passing stranger. “However, none of them ever work out. Something always happens to them.”

Chào asks a vendor selling drinks in front of the building but he disagrees with the haunted claims and gives a straightforward reason for its abandonment. “Don’t believe what people say! What really happened is that Bulgaria bought the place, but they’ve abandoned it because they didn’t have enough money for renovations. The only thing that’s going on inside the place is lads going in there to do drugs. People are just posting fake information on Facebook to get likes.”

However, when we go to visit the supposedly haunted house, our Grab Driver doesn’t seem to keen to visit. “That place? You want ghosts to kidnap you or what?” he says. But after a little cajoling he agrees to take us there, though does not hang around for long.

We stroll around. It’s deathly quiet. A stray dog seems to just stare at us forever, barely moving. A lonely security guard sees our unease and swiftly dismisses our questions as hearsay. “This is not a haunted house at all. Look at the houses across the streets. People die in those all the time! Why are those houses not haunted, but this one is?” Given that he guards the building day and night, perhaps he should be trusted. Perhaps.