[People of Hanoi] The wooden-stamp maker 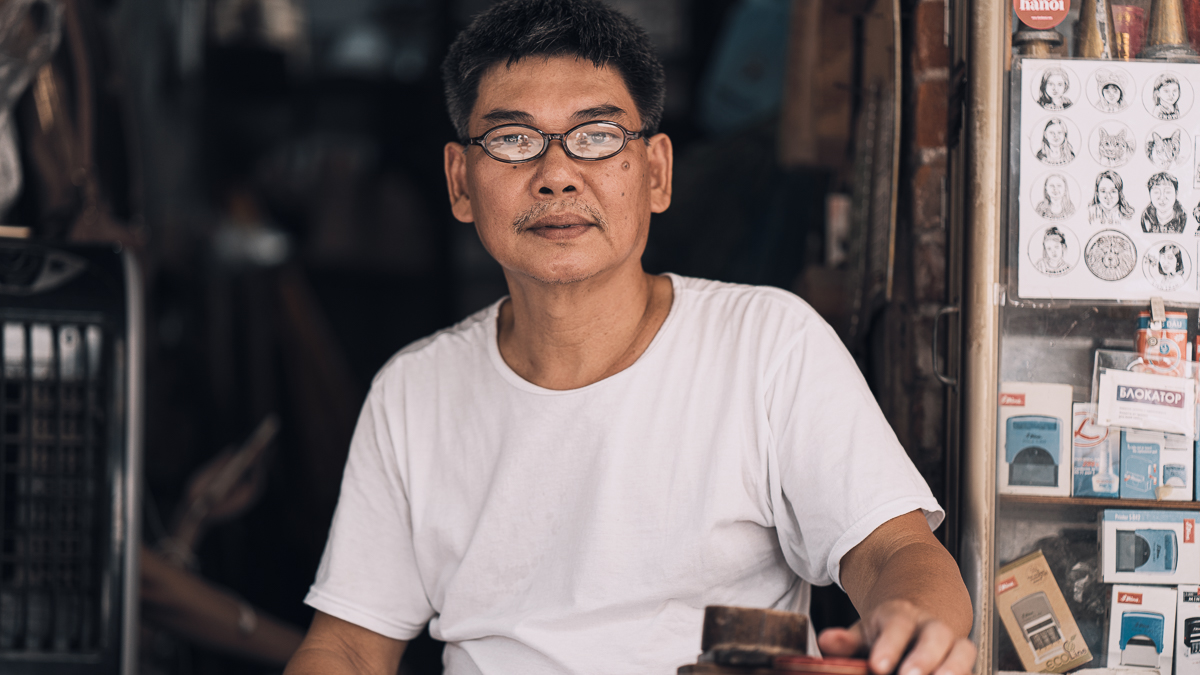 Phuc Loi stamp store lies right near the intersection of Hang Quat and Luong Van Can streets in Hanoi’s Old Quarter. Despite the storefront’s tiny size, the fun wooden trinkets on display make for an eye-catching sight. On Chào’s visit to the owner of the store, Pham Ngoc Toan, is having an afternoon nap but to our relief he wakes up to greet us, happy to chat about the Vietnam’s traditional craft of stamp-carving.

From the very first glance, Toan – now 65 years of age – embodies the energy of a Zen grandpa who lives next door and always has lessons to tell. Softly-spoken, Toan’s raspy, steady voice chronicles the story of his life, intertwined with this second home – the humble Phuc Loi store – in philosophical anecdotes.

Toan produces an array of handsome handmade wooden stamps. In colorful plastic baskets for customers to dig through, lay heaps of different stamp designs, such as cutesy animals and funky symbols, each piece costing 70,000 to 100,000 VND (ink included, either red, black or blue). To make it a more personalized item, you can get your name carved on-the-spot. He says that his primary customers are tourists. “Ever since the tourism scene started booming, I have leaned towards the travelers. They sell better and the earning is higher.”

The wooden trinkets make for easy yet unique gifts for friends back home. However, tourists are not Toan’s only customers. He also makes unique molds for mooncake factories (a traditional food eaten during Mid-Autumn Festival), and seals for companies. Some of his client are even shamans who need stamps for special paper they use during their ceremonies.

“The shamans perform exorcisms to chase away evil spirits…just endless routes when it comes to the spiritual world, even feng shui stuff!” he says. “I think you just stick four amulets in four corners of the house or something…”

For this artisan, the workshop is located right outside the store, on the sidewalk. It is hard to say whether this is due to the lack of space that is signature to Hanoi’s Old Quarter, or perhaps a deliberate piece of showmanship. Regardless, the process is undeniably a joy to watch.

Upon receiving his design order – Chào‘s very own logo, of course – Toan pulls out the pre-made wooden stamp and proceeds to round out the edges with a specialized machine.  Then, he uses a coated abrasive to smooth out the flat surface that will be inked later, preventing a blotchy finished look. Whipping out a mysterious bottle, he lays our printed logo onto the wooden surface and brushes the strange liquid on top. “That’s petroleum,” he explains, on seeing our puzzled faces. “It transfers whatever image I need to carve.” It works in similar fashion to the temporary water transfer tattoos beloved of children all over the world.

“He didn’t understand that if I make a mistake, they laugh at him just once but the craftsman tenfold.”

Today Toan also does portrait designs for 250,000 to 450,000 VND a piece. Customers send in any photo they wish to have turned into a stamp. However, don’t be fooled into thinking the stamp carving process is merely copy-and-pasting from one medium to another. Lesser seen creative elements are involved.

“I have to come up with the design myself quite often,” Toan says. “I was asked to design a stamp for [the then] President Ngo Dinh Diem’s right hand’s man, Bui Kien Thanh, when he came out with a new book ‘The wanderer who holds the key’ (Người mở khoá lãng du). His publisher wanted to design a special stamp for the occasion. I took the title as inspiration and combined the key symbol with Bui Kien Thanh’s name.”

Toan’s keen eye for detail isn’t just proven through him carving intricate designs; it’s also ‘seen’ through his ability to observe others’ characteristics: “Bui Kien Thanh is a capable man, he can speak eight or nine languages. Chances are Chinese is probably one of them, don’t you think? So in addition, I made him an alternate version with Chinese characters. The man loved it, and even gifted me a copy of his book.”

Knowledge of Chinese writing is useful, some might even say compulsory in this line of work, where stamps are often used for ceremonial purposes which feature predominantly Chinese characters. Chinese was used in Vietnam up until the early 20th century, and today, nearly 60% of modern words in Vietnam bear roots from the nation that once occupied it for 1,000 years. Toan, naturally, picked up the basic vernacular of this northern neighbor over the years.

“There are many variations of Chinese calligraphies: seal script, regular script, cursive script. What I don’t know, I ask and learn from my more knowledgeable buddies,” he says. “Why? because each word [may] comes in pair with multiple meanings. It’s not like western languages where A equals A, and B equals B. Here “A” might be the sound of a child gleefully seeing his mom comes home, or the surprised sound somebody makes upon seeing a long-lost item.”

To ensure minimal mistakes, he relies on his trusty holy-grail, a translation book that’s looking particularly tattered from the frequent use: “A customer once asked ‘why is the character all bendy and squiggly?’ I assured them, I don’t make up any of it, and everything is based on this book.”

In nearly 30 years of crafting stamps, Toan has come into contact with all kinds of people and he loves to tell stories about them: “I straight up said ‘no’ to one guy. He was a younger man, came and told me his name was Thanh and asked me to do whatever I wanted with it. When I pushed for more details, he glared at me saying ‘I’m giving you money. Why are you acting all nitpicky and difficult?’ He didn’t understand that if I make a mistake, they laugh at him just once but the craftsman tenfold. Anyway, he came back and said sorry in the end.”

“There are people who know how to carve an entire poem onto a grain of rice! This stuff is just child’s play compared to that.”

Toan proudly shares his previous work on his iPad. There’s rarely a physical second copy of his handmade stamps, but most of the designs are saved online.

On discussing the difficulty of his craft, Toan is humble and straightforward. “An everyday man can learn to do a decent job in a month, but to do a great job, your level of talent comes into play. That’s just the way it goes, some tailors can only make pajamas and shorts, recycling the same items their whole life, others craft their own designs…they make shirts! Society’s funny that way.”

We ask him if he sees himself as a master or someone who just makes pajamas and shorts, and the pepper-haired craftsman gives a light chuckle before giving his two cents: “Perhaps to you guys, what I do might seem impressive, but I simply had a lot of practice. There are people who know how to carve an entire poem onto a grain of rice! This stuff is just child’s play compared to that. Anyway, it’s no good to brag. Someone who puffs out their chest has probably not grown into a complete person.”

Finishing up our piece, he warns us that the stamping won’t have that ‘HD quality’ of, say, a printed piece of paper. But we are not seeking robotic perfection. It’s the tiny, rugged ‘mistakes’ that give crafts a personal touch, so loved that the Japanese have given the imperfect, impermanent, and incomplete aesthetic a name of its own: wabi-sabi. “Simplicity triumphs,” Toan says smiling. Here at Chào, we wholeheartedly agree.