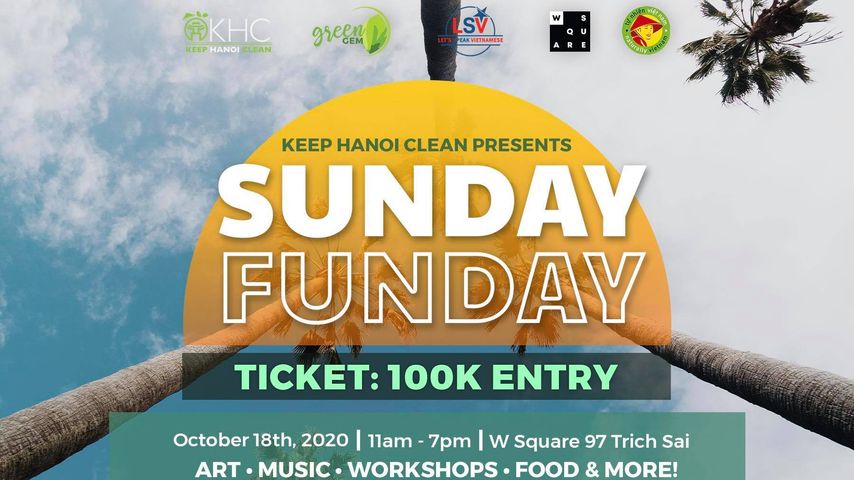 For several years, Hanoi has been becoming more environmentally conscious, and today the city will see a fundraiser for Keep Hanoi Clean, a social enterprise devoted to raising awareness about environmental issues and inspiring local and foreign residents to protect the city’s environment.

The Sunday Funday will see vendors selling eco-friendly products, including a large variety of second hand clothing and other standout items from Keep Hanoi Clean’s own Green Gem Shop. There will also be a host of activities including, salsa dancers, art installations from local artists, crafting workshops on how to recycle plastic by Dr Plastic and Napo Land, and paper art mask crafting, along with a wide selection of food vendors such as Ngon Bites n’ Veggies, Bun Cha Burger and Cousins.

Keep Hanoi Clean founder James Kendall started the enterprise in 2016 after a big chemical spill in Central Vietnam caused millions upon millions of fish to die in the ocean. “After seeing the great awakening among Vietnamese people, I decided it was the right time to begin organizing cleanup events to raise awareness about the environment in Vietnam. In addition to that, my love for Vietnam and Vietnamese people also inspired me to begin doing something to connect the community and have a positive impact to benefit local people,” he told Chào.

The organization has since successfully inspired thousands of people to think about doing small things to make a big difference in the community, involving over 3,000 people joining almost 100 cleanup events with many other groups.

“After seeing the great awakening among Vietnamese people, I decided it was the right time to begin organizing cleanup events to raise awareness about the environment in Vietnam.”

As Keep Hanoi Clean has continued to grow, with larger and more effective projects being implemented, their need for fundraising has become more vital to producing long term results.

The event will be put on in collaboration with Let’s Speak Vietnamese language center. Tickets at the door will be 100k and include a welcome drink.

If you are concerned about the environment in Hanoi and want to be part of the solution, check out the event.  Be sure to bring your dancing shoes as after 7 p.m. there will be an after party to celebrate support from the community.

Related Topics:CharityEnvironmentEventsFeaturedfundraiserKeep Hanoi Clean
Up Next