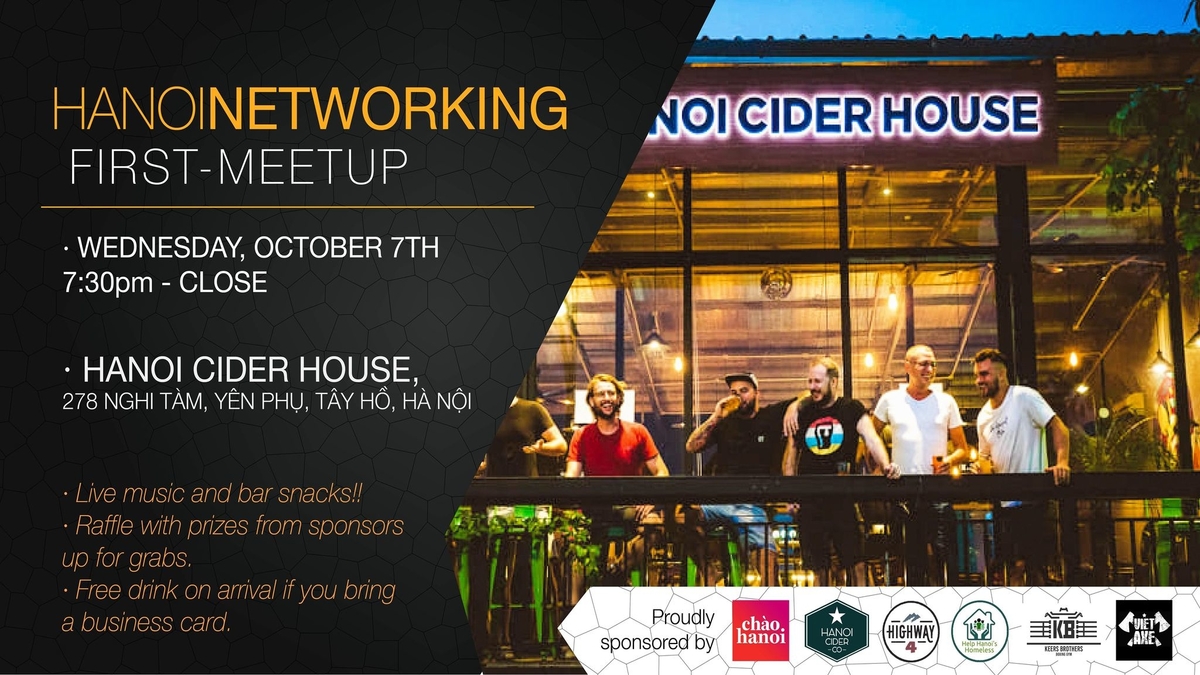 Despite being the political, cultural and literal capital of one of the most diverse, dynamic and fastest growing nations in Southeast Asia, Hanoi still often feels like a giant village, a place to loll about and enjoy yourself and to drink endless bia ho–a place where everyone knows you name (particularly among the expat community).

Yet, despite everybody seeming to know everybody, interaction is usually socially focused: people meet at the bar, the gym, the bike rentals shop, and opportunities to build professional networks can be a little limited in the great capital compared to, say, Ho Chi Minh City where things can feel all-business at all times. Hanoi (thankfully) is the sort of city where people are going to raise eyebrows if you have spent that little bit too much time on your LinkedIn profile, or think you are a wanker if you wear a tie too often. People take it easier here, and life is better for it.

Billy Gray, a Hanoi-based media consultant from the UK, loves the city but has long felt there is a lack of events to meet and connect with people professionally.

“Seventy percent of the work I have got this year is from a networking event I attended earlier. They are a fantastic way to meet the people you want to meet, whether it is to help build a brand, find an investor, or just speak with other people in your industry and stuff. I have always been amazed there are not more of them in Hanoi,” he tells Chào over a late-night whisky. “I mean, I went to one event in town a couple of times, but it was basically a guy trying to flog everybody life insurance.”

Such frustrations have led Gray to set up his own monthly networking event that he hopes to rotate at several popular venues across the capital, depending on where the interest lies. Gray’s first Hanoi Networking Meetup takes place this Wednesday at Hanoi Cider House.

“Am really pleased to be doing something a little different here, and there’s already been huge interest. Hopefully, it will be a great night to meet new faces and, of course, try some of the best cider in the country,”

“Am not going to go in for anything too heavy,” Gray says. “It will be 50 to 100 people in a range of backgrounds to chew the cud and find out if they can help each other. We have people from Media, F&B, Telecoms and Light industry turning up. But it is not going to be too formal. That’s why I wanted the first one at Hanoi Cider House; it is such a relaxed, chilled-out venue.”

Guy Dickson, founder of Hanoi Cider House, is also eager to launch the event. “I always like it when people try new things, and we are always up for experimenting at the cider house. Sure we do DJ nights and parties here, but why not try something else. Am really pleased to be doing something a little different here, and there’s already been huge interest. Hopefully, it will be a great night to meet new faces and, of course, try some of the best cider in the country,” he laughs.

Aside from a chance to press the flesh, the event will see live music on the night plus some snacks to enjoy while meeting new people. Dickson is even (perhaps a little nervously) giving a free cider to anyone who brings a business card. There will also be a raffle with prizes from the events sponsors, including a chance to win a bottle of Son Tinh rice liquor courtesy of Highway4; a two-hour axe throwing session for two people from Vietaxe; a session at Keers Brother’s Boxing Gym; and vouchers for food and drinks courtesy of Hanoi Cider House.

Hanoi Networking has also partnered with Help Hanoi’s Homeless to raise money for people in need throughout the city. People will be able to make donations at the event at their own discretion.

“We hope people just come and enjoy the evening,” Gray says. “A chance for people to loosen their ties, or more likely not wear one. This is Hanoi after all.”