A journey through weird and wild Vietnamese cuisine: Highway4 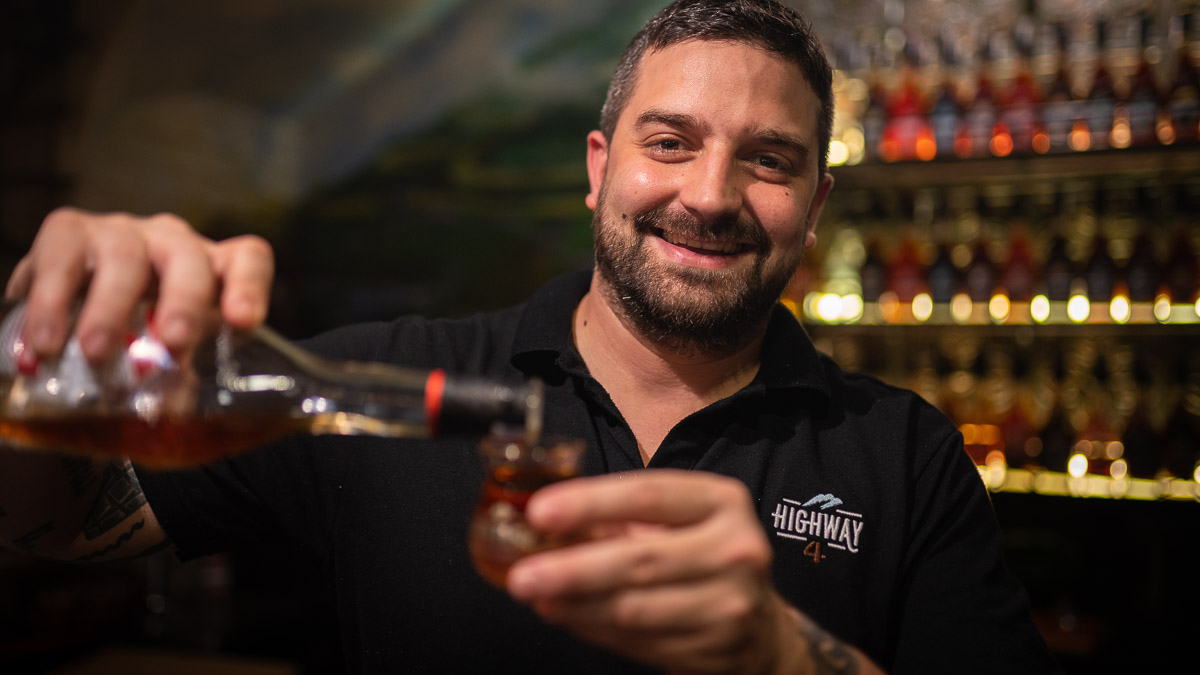 It is a chilly evening just before Valentine’s Day in Hanoi’s Old Quarter, and Andy Ponyiczky, a barrel chested Hungarian-German with a twinkle in his eye, is laying out dishes in a Vietnamese eatery with a 20-year legacy. Things start off tasty and straightforward with just a pinch of adventure: a banana flower salad with peanuts, catfish spring rolls, some smoked pork sausage from Cao Bang— a mountainous province in northeast Vietnam, a few shrimp cakes and a bit of shredded buffalo. It is a hearty spread.

Twenty minutes later Ponyiczky is warming up and moving through his gears, as he asks Chào if we want a shot of the liquor for which this local Hanoi tavern, Highway4, is famed. Seconds later a tray of 12 shots appears on the table. Crisscrossing the tray they go from the clear color of vodka through to almost black like Jägermeister; the punchy Son Tinh craft liquors tip-tap their way through a range of exotic flavors from sticky red rice, and apricot, to passion fruit, rose apple, and obscure Vietnamese herbs known for their medicinal properties. If you want a taste of pure Vietnam distilled in a glass, this is it. It quickly becomes clear it is going to be a long night, but Ponyiczky tells us not to worry. “This stuff won’t give you hangovers, never,” he beams. Yeah, right.

For Ponyiczky’s next trick he brings over a couple ramekins of what look like a kind of textured brown salt, we wonder if it is a little known local pepper or somesuch. “What’s this?” Chào asks. “Just Ants,” he says grinning. “They go well with the sun-dried deer.” And with that, we scoff down half a bowl of ants. They taste sweet, not bad at all (for ants).

“Occasionally we have my favorite, which is cicada, big fat bugs called mang chom. We cook them in pork fat with lemon leaves, like crickets, absolutely amazing, nice and crunchy.”

Squat, ex-military, thickly-stubbled and with huge tattooed forearms, it is hard to say if Ponyiczky looks terrifying or like a giant cuddly bear, probably both. He is the sort of guy you would want by your side if someone tried to mug you. Saying that, if you were with Ponyiczky it is doubtful anyone would be stupid enough to try. A long-term veteran of hospitality, he loves talking about Highway4, which makes sense as he manages the restaurant (there are three others in the capital), on Hang Tre Street in downtown Hanoi.

“We don’t turn tables here,” he says repeatedly. “We are more like a German tavern, though our food can be very unusual, definitely for the brave. You can come and eat, take your time, chat with friends. Drink, and drink some more. Our Vietnamese customers come here and drink and eat slowly for four hours at a time. It is no problem!”

“We have crickets all around the year, and at the moment, we have got locusts from Mai Chau. Occasionally we have my favorite which is cicada, big fat bugs called mang chom. We cook them in pork fat with lemon leaves, like crickets, absolutely amazing, nice and crunchy.”

Highway4 does Vietnamese food with a modern twist. It is named after the lengthy mountain road in North Vietnam that is known for its standout fruits, herbs and spices, a hat-trick of culinary flavors that inspire pretty much everything the tavern does. The artful environs are a far-cry from your average street-food joint, which make it a fine spot to take people who want to be really adventurous with their food, but perhaps do not want to hunch on a plastic stool next to someone trying to flog knock-off sunglasses.

“When I look back at the menu from the early days, it has evolved over the years; we had [and have] crickets and things. It’s not always easy. But, look, we always want to prioritize Vietnamese customers, or at least give our foreign customers a Vietnamese experience,” he says. “A lot of people go, ‘oh no, chicken feet, ants,’ but I have to educate them. Occasionally I have a situation where a customer comes in and goes, I want chicken breast and fries. And I think to myself, well I know a good KFC right around the corner!”

He now likes to refer to himself as Mr. Soda on account of his only drinking soda in the week. Though over the course of three meetings, Chào never so much as sees Ponyiczky drink a single drop.

“But also I have couples that go ‘hit me’ with some cool dishes and then we crack out the blood sausage, crickets, frogs and go a bit deeper into all that, and they love the recommendations.”

Highway4 was founded by long-term Hanoi expat Dan Dockery, who has been in the capital over 20 years and dabbled in almost every business in Vietnam you can imagine: motorbike tours, restaurants, craft beer, music festivals, stand-up comedy. He has a touch of the Irish rogue about him, which is unusual as he grew up in England–maybe it is in the genes. He does not quite strike you as a regular businessmen either. It almost seems like he is in it all for a laugh, to try out new things and see where they go, just because he can. His life in the capital is so storied than Ponyiczky refers to him as Mr. Hanoi. But there is logic to Dockery’s thinking and a canny intelligence; he obviously has a touch for reading people.

“I remember when I first met Andy,” Dockery says. “We went on this, I don’t know, 17 hour bender, and at the end of it he asks me, ‘Did I get the job?’ I told him he had the job before we met. I had seen his CV, so just needed to see if we would get on. What’s the point otherwise.”

It is this people-orientated approach that has seen Highway4 thrive for so long. A man working security and helping park bikes outside the restaurant proudly told Chào he had been working there for 20 years, before inviting us to smoke a bamboo bong (thuoc lao), which we tried, albeit a touch nervously.

The secrets to this magic potion, we may never know, but it likely would have made Asterix himself proud.

It is some time after the second tray, and then the second bottle of Son Tinh that Ponyiczky proudly announces that he does not drink in the week, just at the weekends, as he likes to stay focused for work (an amusing comment coming from a Hungarian late on Thursday night.) Dockery even jokes that Ponyiczky now likes to refer to himself as Mr. Soda on account of his only drinking soda in the week. Though over the course of three meetings, Chào never so much as sees Ponyiczky drink a single drop. (Perhaps he drinks it secretly at home.) Nevertheless, he is a consummate restaurant manager, constantly taking you through the food, where the dishes are from and what liquor they are best paired with, and what makes the Highway4 food a bit different from the average Vietnamese restaurants you find dotted throughout Hanoi.

“One of our most popular dishes are the catfish spring rolls,” he says. “They love catfish here and they love spring rolls, but nobody had put them together before. We do it with a touch of wasabi and mayonnaise on the side. So you have a bit of Japanese influence, a bit of French. As I said everything is with a modern twist.”

It is deep into the night when we leave the restaurant and things are a little blurry, Ponyiczky and Dockery make their way home, the precise hour unclear. Well-fed and liquored, Chào sleeps well, only to wake up on Valentine’s morning, clear-headed, hangover free and, frankly, a bit baffled as to how. It must be something they put in the Son Tinh. The secrets to this magic potion, we may never know, but it likely would have made Asterix himself proud.

Highway4 provides a supreme introduction to Vietnamese cuisine for those willing to dine just a little outside the box, not to mention some first class booze with its much-awarded liquor—Vietnam in a glass. It seems that in the capable but mischievous hands of Mr. Hanoi and Mr. Soda, the restaurant will continue to provide people with many a night to remember, ants or not.