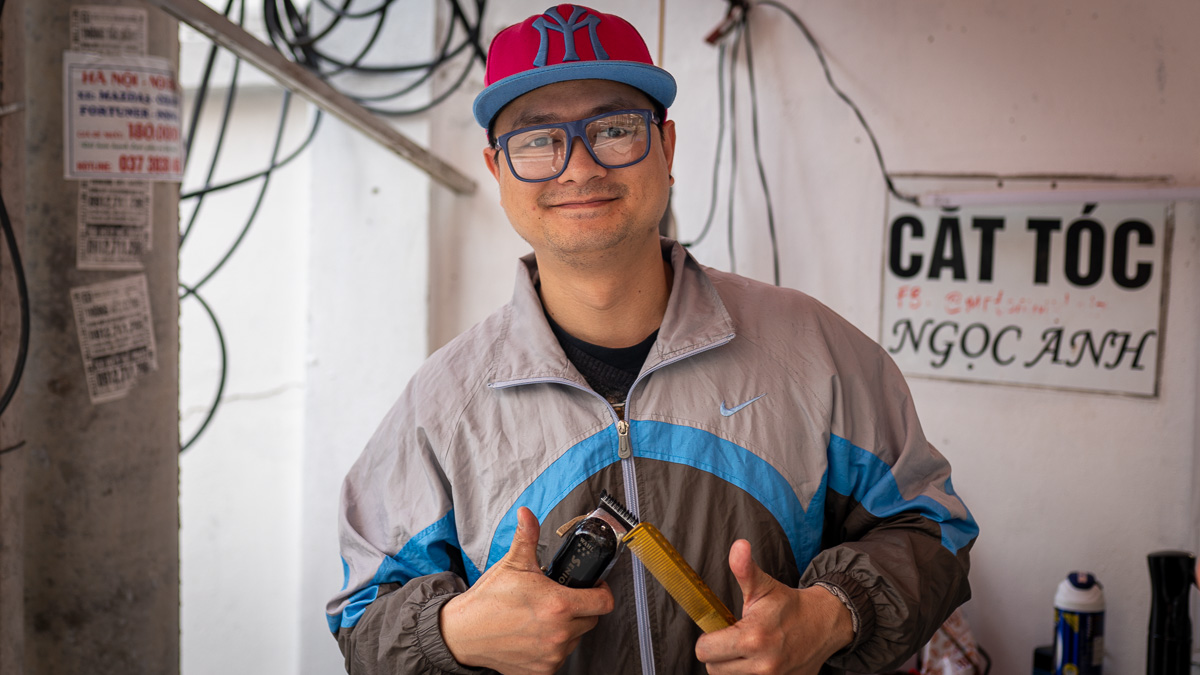 It is a warm spring late-afternoon in Hanoi during golden hour, the sunset seems to stain the street a sparkly orange, and the Chào team decide to go for haircuts. In the hope of finding a new barber shop around Tay Ho, we wander aimlessly until we chance upon a large convex mirror twinkling from across the street. We cross the road to find Tommy (Nguyen Ngoc Anh) dressed in a light blue lumber-jacket and loose jeans, all set off with a dazzlingly bright pink hat. He gives us a cheeky grin.

Constantly on the move, Tommy shifts from side to side, completely focused on his job. When we make our request for haircut he just smiles and gets on with his customer; they seem to be communicating in a series of complex hand gestures, but this is not because Tommy is Vietnamese and dealing with a foreign client, but because he is deaf.

Later, Tommy gives a Chào editor a head shave and beard trim, which he does in slow detail, careful to get it just right, as he does so a queue begins to form even though there is now light rain in the air. He is clearly an immensely popular barber. Wanting to know more, we communicate with Tommy in a series of hand-written notes, and he kindly tells us about his journey: “I have tried some other jobs such as flowers decorator, jewelery creator, I even joined the city contemporary dance group, however, I found myself unsuitable in all of those positions. Being a barber was just the right fit.”

“I’m giving my mate who cuts my hair a plug, because he’s totally awesome, I’ve had hundreds of haircuts and his have been the best, by a long shot.”

In 2008 Tommy’s father passed away, his mother was retired and his sister had received 950,000 VND from the Agent Orange Fund. The whole family was struggling financially. Tommy had no choice but to try to make ends meet, so he decided to pursue his passion to a barber, despite the fact all his experience was in other things. However, the cost of a bricks-and-mortar shop was prohibitive so he set up on a small, peaceful street-side corner in the Vietnamese capital.

“I chose a corner in Tay Ho in 2015 and started becoming a barber, as I could not afford a proper shop, this has become my working place,” Tommy tells Chào. “I cannot hear and talk, so there are a lot of communication limitations. The job is also quite challenging since I work outside and completely dependent on the weather. Working in the winter is much harder since it’s very cold.”

He says that people in the past have always showed him great sympathy and cared about him, so that for a while he experienced an inferiority complex, but he is over it now.

“Many of my customers, especially foreign ones, they always smile when they see me. If I’m hungry they will buy food and drink and bring it here,” he says. “They even remember my birthday and bring me presents, I really appreciate them.”

It seems that the locals and foreigners alike respect Tommy for his graceful manner and fine quality barbering. “I’m giving my mate who cuts my hair a plug, because he’s totally awesome, I’ve had hundreds of haircuts and his have been the best, by a long shot,” writes Marcus Lacey, an expat photographer and frequent customer, in an online post.

Stephanie Lilly, a Chào writer and a regular customer of Tommy, says that when she arrived in Vietnam she found the whole concept of an outdoor haircut bizarre. “Back home in Canada, we always go into a salon,” she says. “I can’t remember using a deaf one before, but Tommy is great.”

“When I first went to him, there was a line-up of three men waiting. I pointed to my shaved-cut under my hair and he smiled and pointed to the three others waiting, then pointed at me and showed me four fingers, meaning I was fourth in line.”

“It was a very pleasant experience and sometimes you can just tell someone is a really good person. That’s the vibe I got from him even though no words were exchanged between us, he just seemed like a genuinely nice human being. Now I go back to him every month to get my hair done.”

Though he cuts hair without words and without fanfare, Tommy works professionally, charges a reasonable price and has an infectious smile that will provide the extra boost alongside the one that a good haircut usually brings. Come rain or shine, Tommy will be on his corner and ready to give you a haircut and brighten your day with a thumbs up—a true Hanoi legend.

“There was one time I had a really drunk foreign customer”