"There was one time I had a really drunk foreign customer" 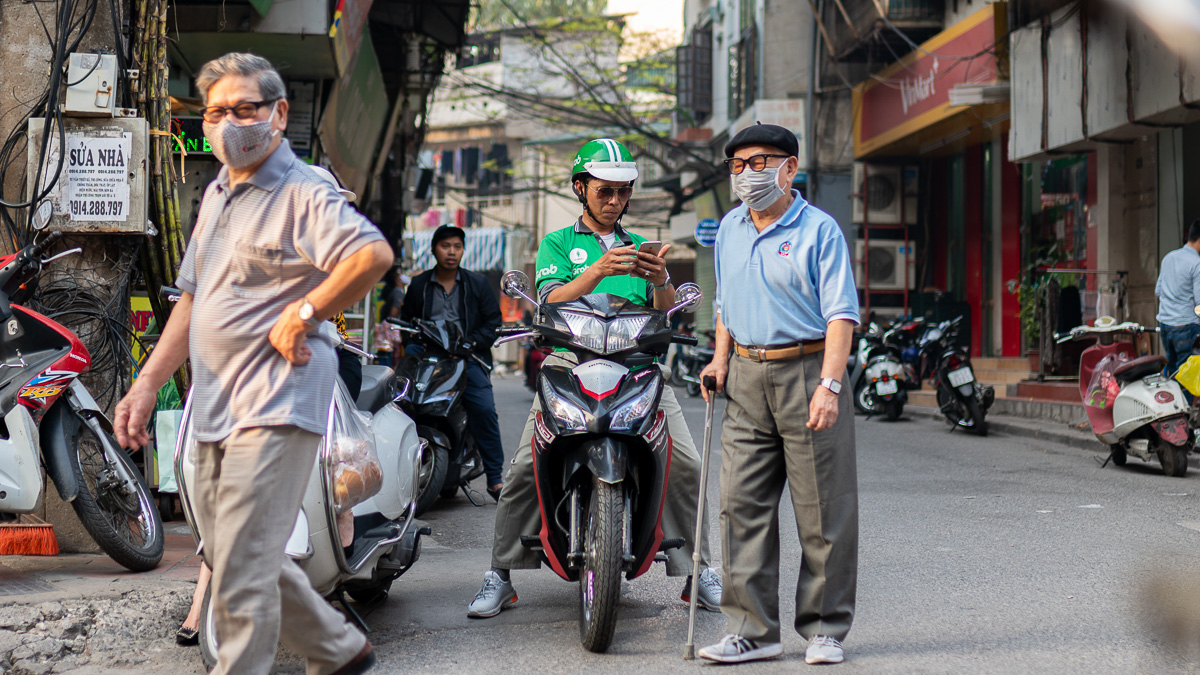 Hanoi is a city of endless motorbikes known as xe om (lit. hug vehicles), and the translation nicely illustrates the concept of ‘holding on for dear life,’ which anyone who has spent any time in the city will know all too well.

Xe om is a catch-all phrase for the different types of motorbike taxis, the most recognizable being Grab, those green-liveried guns for hire you can see dotted throughout the city, almost on every single street corner. This Singaporean ride-hail company seems to have taken over the entire city, but what is life actually like for a Grab driver?

On a warm, clear day next to Hoan Kiem Lake you can invariably find Mr. Long resting over the handlebars of the motorbike that forms his livelihood. He takes quick breaks here before he is whisked away by his next customer. “This job is really tiring and dependent on the weather,” he tells Chào.

Middle-aged and balding he speaks in an assertive, abrupt way, confident in his own knowledge of a job he has been doing for so many years. He does not mince his words. “I work every day,” he says. ”We have to work non-stop and it’s exhausting.”

Long is not wrong. Being a moto-taxi driver is tough. It does not pay particularly well either. Depending on hours worked, an average salary will usually be around 4-8 million VND (175-350 U.S. dollars). It is not just the low pay, but the unpredictability of the work that makes the job so tough. “There are days I get 300,000 dong, but some days I only get 30,000,” Long says.

Across town, under a bridge next to a freeway, car fumes mix with the smell of damp air, and we meet Trung who is perched on his bike, head hunched down over his phone as he simultaneously takes a moment to rest whilst also touting for customers in a convenient if unappealing location.

When it comes to Grab his face hardens. “Many drivers think the remuneration policy of Grab is stupid and not fair,” he says, presumably in agreement. “The Grab system automatically minuses 60,000 VND every day from your account, even on the days you are not working.”

One wonders if there are rivalries between the different genre of moto-taxi, and we hear stories of groups of different drivers, corralling the streets together, looking for trouble in a sort of gangland public transport dystopia.

Grab has brought many changes to the life of a xe om driver. Originally the job entirely consisted of self-employed individuals, sitting on motorbikes at the side of the road, gesticulating and calling out to potential customers. Anyone who has been on a trip to the Old Quarter will instantly recognize the hustle.

“Before I became a Grab driver I was a traditional xe om driver,” Trung says. “But of course Grab users are getting bigger day by day, and the number of people who choose traditional xe om is gradually decreasing.” Like many drivers, Trung simply thought it would make his life easier if he signed up with Grab, and so he did.

One wonders if there are rivalries between the different genre of moto-taxi, and we hear stories of groups of different drivers, corralling the streets together, looking for trouble in a sort of gangland public transport dystopia.

“Yeah, that sort of happens,” Trung says. “Sometimes I have to drop off my customers at the bus station, hospital or school, and I cannot stand there for a few more minutes because if I do there will always be one or two traditional xe om drivers come and ask me to leave because that is their spot.”

It seems that turf war, or a version of it at least, is still alive and well. “Personally I have been through a lot of situations when the traditional xe om drivers got angry and asked me to leave,” Trung says rapidly, clearly enjoying getting things off his chest.

Trung is younger and friendlier than Long. He is the sort of driver willing and wanting to chat as you sit behind them; the type to cheekily ask you where you come from or if you like Vietnamese girls.

“Yes, I often have foreign customers but mostly I need Google translation to communicate with them,’ he says grinning as he leans back on his bike. “There was one time I had a really drunk foreign customer. He sat unsteadily on my bike and it was really hard to keep the balance with the language limitation.”

Online technology (and alcohol) has brought an ever growing number of foreigners into contact with xe om drivers. More than a few become friends. But with Grab now available in nine countries across Asia, and many tourists and expats using the the app to book rides when they are in Vietnam, the extra exposure sometimes causes a few problems.

Back at the lake, Long is in full flow eager to pitch in his two-cents. “There have been cases [where foreigners refuse to pay], mostly because they were drunk and were not aware that they had to pay the service fee. For foreigners with language barriers, it is really hard to explain, especially when they are drunk.”

“If we bring the case to the local authority, we Grab drivers usually end up on the disadvantaged side, since the authority often protects and prioritizes foreigners.”

It is hard to not feel sympathetic for drivers like Long. They often end up at the bottom of the pile and struggle to make ends meet, but he is not bitter. “Most of the European customers I meet are really polite though,” he adds.

“Even for me, a Hanoian, I can still get confused sometimes with the street numbering system here.”

Before I go there is one thing I really need to ask. Anyone who has waited for their driver for 15 minutes, as they ignore the location and drive round and round in circles will know exactly what I am talking about. Getting lost can be baffling in an era of (mostly) accurate online maps.

But Long, as ever, has an answer ready. “There are many Grab drivers who are university students from the countryside and do it as their part time job,” he explains. “They are new to the city so there are many roads they have never been to.”

He pauses for a moment to think, perhaps considering that he has been hard on his student colleagues. “Even for me, a Hanoian, I can still get confused sometimes with the street numbering system here.”

And with that, he is finished. His phones buzzes, the app opens and duty calls, a curt goodbye and he’s gone. Meanwhile across town, Trung is still where we first saw him, waiting for the next job so he can pay his rent. Working hard, hoping to get his next gig.

Related Topics:FeaturedGrabMotorbikesVietnamese Transport
Up Next