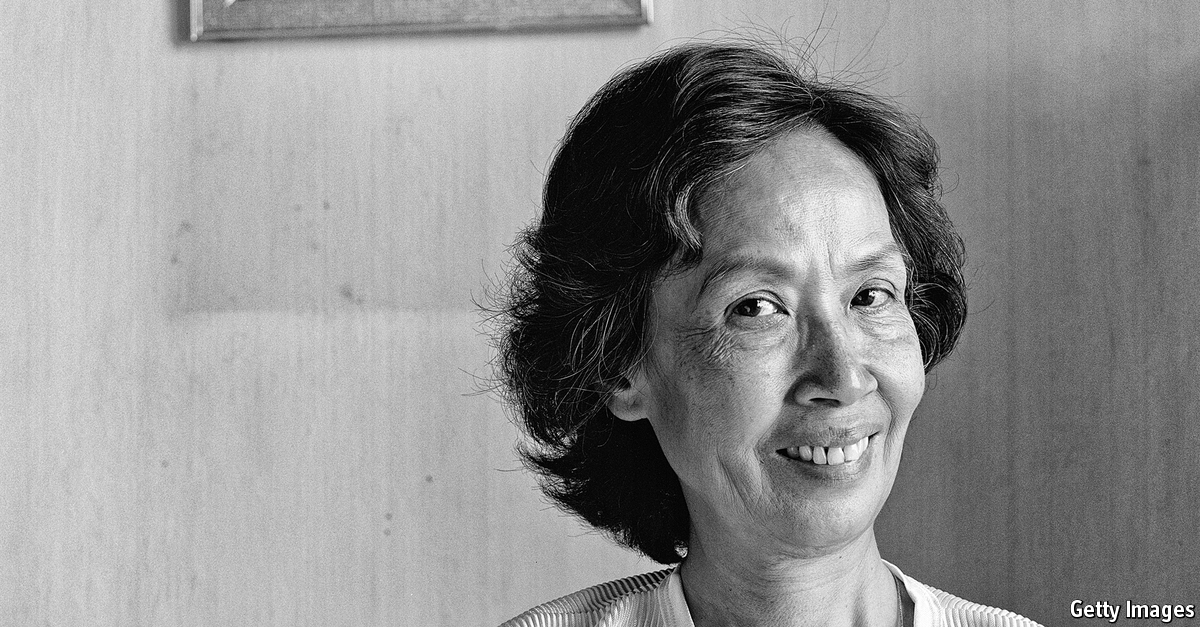 Aside from spilled blood, exploding bombs and the literal violence of the American War, it was also a battle of information. And Vietnam’s most significant—certainly most written about–propagandist was Hanoi Hannah (1931-2016), a well-spoken middle-class Hanoi woman whose job was to encourage American soldiers to defect, abscond and generally give up the fight.

“How are you, G.I. Joe? It seems to me that most of you are poorly informed about the going of the war, to say nothing about a correct explanation of your presence over here. Nothing is more confused than to be ordered into a war to die or to be maimed for life without the faintest idea of what’s going on,” she said in one of her wartime broadcasts.

Her program “A small talk to American G.I.” was hugely popular among U.S. soldiers for a variety of reasons. Some simply liked the music, as she often played popular American hits, many of them anti-war songs, which were banned in U.S military broadcasts. Bob Dylan was a favorite. For others it was just the sound of a sensual woman’s voice, someone who was addressing them directly, even if it was an attempt to make them feel sad and undermine them.

“I never felt aggression toward Americans as a people. I never called them the enemy, only adversaries.”

As U.S war correspondent Don North wrote in the New York Times: “For bored G.I.s, Hannah’s broadcasts were often rare sources of amusement. A man’s radio was, after his rifle, his most valued possession. Like the rifle butt, the radio was often wrapped in frayed black tape for protection. Troops would laugh over Hannah’s attempts to scare them into defection or suggestions to frag an officer. However, they did wonder if she was as lovely as she sounded, and many considered her the most prominent enemy after Ho Chi Minh.”

Despite passionately believing in her scripts and desperately wanting the United States to leave Vietnam, in her later years after the war she carried little animosity and had clearly taken a sanguine approach to all that had happened: “When the bombs came on Hanoi, I did feel angry…. But even then, when I spoke to the G.I.s I tried always to be calm. I never felt aggression toward Americans as a people. I never called them the enemy, only adversaries.”

“A small talk to American G.I.” was a part of the propaganda strategy of Vietnam’s national radio station, intending to help American soldiers gain insight into the war from a Vietnamese perspective, and despite the clear propaganda element to the broadcast, it was sometimes a valuable source of genuine news of events happening around them, both in Vietnam and in America.

She broke one of the most shocking news stories of the Vietnam War, the massacre of several hundred Vietnamese civilians in the village of My Lai in 1968. She also tried to dampen the soldier’s spirits through reading lists of newly killed or imprisoned Americans, playing popular nostalgic playlists to arouse feelings of homesickness as well as recorded messages from Americans against the war to make them believe that the war was immoral. “Americans will believe their own people rather than the adversary” she said.

Of course, Hanoi Hannah was not her real name at all. She was born Trinh Thi Ngo in a nationalist bourgeois family in Hanoi that owned the largest glass factory in French-Indochina, and it was this privileged background that gave her access to much Western culture from early on. She learned French and English from a young age, and reportedly improved her language skills through watching films. “Gone with the Wind” was said to be a favorite.

“I heard Hannah every day. She was a marvelous entertainer. I’m surprised she didn’t get to Hollywood.”

Introducing herself as Thu Huong, meaning “fragrance of autumn,” the American soldiers dubbed her Hannah instead, presumably because it was easier for them to pronounce than Huong. Though it was only years later she realized she has the moniker, saying: “Hannah is an American woman’s name that starts with the letter H and my name Huong also starts with the letter H… I didn’t care what American soldiers called me. What mattered was that they listened to our radio programs for which they were the target audience.”

She was barely 24 when she joined the Vietnam national radio broadcaster via a recruitment of English announcers, though she said it was for patriotic rather than political reasons. “I thought it was time for me to do something to contribute to the revolution, so I volunteered to work at the Voice of Vietnam.”

In 1965 when the U.S. troops flocked to the battlefield in South Vietnam, the station began broadcasting propaganda. With her English accent and its strange cadence, “A small talk to American G.I” became so popular that the United States military had to ban their soldiers from listening, but it was to no avail. Nevertheless, it is unlikely many people actually defected because of her work. The soldiers more likely listening to pass the time, and in a state of detached amusement rather than for serious political reasons. As North wrote: “Her broadcasts were mostly exaggerated war news, encouragement to ‘frag’ — assassinate — an officer and go AWOL, or suggestions that the soldiers’ wives or girlfriends were cheating on them. She was mostly greeted with loud laughter. But taped interviews with downed pilots or from American antiwar advocates like Jane Fonda were heard with anger.”

One soldier she did impress was late U.S. politician and war veteran John McCain. Imprisoned in the capital’s infamous prison, dubbed the Hanoi Hilton, for over five years, he would often listen to her program: “I heard Hannah every day. She was a marvelous entertainer. I’m surprised she didn’t get to Hollywood.”

Ngo spent her entire career in broadcasting, switching from radio to TV in 1976 after the war had finished and she moved to Ho Chi Minh City with her husband. “Let’s let bygones be bygones, she told C-Span in an interview in 1992’. “To keep the rancor in our hearts for so long is no good.”

Her broadcasts had a haunting, ghostly quality and occasionally were even lyrical, such as when she talks of helicopters falling from the skies like broken birds. Some of them have entered popular culture, in anything from samples on techno tracks to portrayals in popular Hollywood movies such as Spike Lee’s recent “Da 5 Bloods,” where Hannah is played by Veronica Ngo.

With her cut-glass English accent and relentless programing throughout the war, her place in history will remain both indelibly etched in the imaginations of American soldiers as well as in the hearts of the Vietnamese people as one of the country’s most prominent broadcasters of the 20th century.