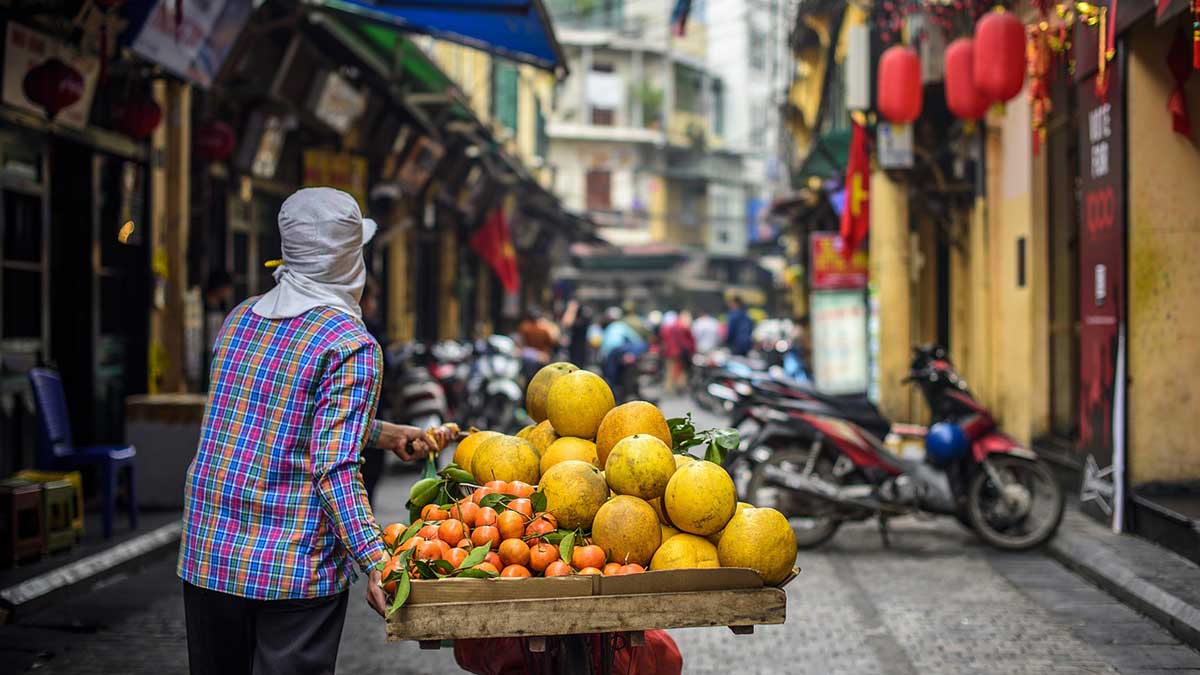 “Be the Vietnamese girl,” my friend said to me as I balanced precariously on the back of his
motorcycle in a pencil skirt with heels swung over the side of his seat. I paused, then I conjured up
an image of an effortlessly graceful woman staring at her phone in a similar position on her way to
work or to conquer the world. Then I became the Vietnamese girl, in practice if not in actuality. Like
most of my endeavors while living in the Ancient City, to assume the Hanoian way of life I could
practice to perfection but true assimilation would forever remain just beyond my grasp. Such was
the nature of my time in Vietnam, an exercise in guts and guile, frustration, and above all: patience.

I had a love-hate relationship with Hanoi while I lived there. The city was jarring in its concrete
ugliness with crowded, ancient streets and warren-like alleyways. I loved the freedom of exploring
on my motorcycle yet felt stifled by an inability to walk around. Any great love I felt for the
experience was tempered by frustrations great and small: live-in landlords overly concerned with
my daily life, the thick haze of pollution hovering over the city, falling ill with respiratory viruses or
stomach flus more times in those first 6 months than in all my years before. Despite these
unpleasantries I could not detach myself from Hanoi completely, could never hate the city for being
what it is. Hanoi has shaped me and continues to do so even now that I am gone. Nevertheless,
when I resolved to leave I did not waste any time.

Hardship as a way of life shapes those who live it and being back in the West makes it all the more apparent just how easy my life has been.

In Hanoi, I worked in a language center where my Vietnamese colleagues (almost entirely women)
worked 48 hours per week compared to my 18 while being paid less than 25% of my salary. Sitting
across the counter from these women made me feel shabby (not to mention ungainly) and I
wondered at our respective circumstances. I learned about these ‘classroom managers’ (in reality
their jobs entailed much, much more) through our visits before evening classes began. A CM was
never to be found rushing into work half-assembled or trying to pull off a messy up-do as ‘casual
chic’. They made grooming in the often treacherous climate of Hanoi look effortless. In spite of the
disparity of hours and compensation, these Hanoian women were cheerful and professional and
made the Western teaching staff look like sloppy, entitled babies.

Outside of work there was an ongoing conversation amongst the expats about the Vietnamese
attitude towards animals. I found the greatest difference between the older and much larger
younger generation most apparent when walking my dog: old women would hiss at him and young
people would stop to pet. Old men typically ignored us except for the few who would cheerfully
shout the breed of dog ‘H’mong coc!” as we passed.

Unnerving though it may be to watch your dinner being disembowled, nothing happens to that animal in the Chau Long market that does not take place in the slaughter house

The truth is dogs typically do not live nice lives in Vietnam but I found the treatment of animals for slaughter to be far more humane than our practices in the West. Over a lunch of “​bun dau met​” (a delectable dish of fried tofu, fermented shrimp sauce, and various parts of a pig) I praised the variety of meat/offal to which my Vietnamese friend remarked that Western food has “no respect for the animal.” The Vietnamese may not see eye to eye with us about treating dogs as something akin to human, but when it comes to the animals we send to slaughter we could learn a thing or two. Unnerving though it may be to watch your dinner being disembowled, nothing happens to that animal in the Chau Long market that does not take place in the slaughter house; the difference being what meets our eyes not to mention how much we discard as waste.

I cannot speak with any authority to the experience of being Vietnamese; as an expat I was oblivious to most realities of their daily life. I was subject to an onerous process for my visa, work permit, and residency card. Going to the bank was a game of roulette (will I be allowed access to my money today?) while other things were much more straight forward: when riding a motorcycle police in the North will let you go with a warning, police in the South will not. When given an answer I deemed to be untrue or simply wished it to be, a good old fashioned tantrum would get me what I wanted; I could never go back to that location afterwards but it did accomplish what I needed. There are certain privileges we take for granted in more developed countries, things we would shudder to recognize as privilege. Hardship as a way of life shapes those who live it and being back in the West makes it all the more apparent just how easy my life has been.

These days as I walk my dog through the manicured streets of suburban Seattle dividing the
uniform houses adorned with neatly clipped lawns, I stroll down the wide, spacious sidewalks and
breathe in the fresh air. Vietnam feels like a distant memory to me from this organized and peaceful
place. A car rolls past me through the wide and empty street, rolling to a complete stop at the
homeowner-installed stop sign. The car seems to take ages to complete the process that starts it
lumbering forward again, it’s great cumbersome shape taking up a large and embarrassing amount
of space. I cannot picture a car like that with all of its clumsy maneuvering in the streets of Hanoi,
constantly on the lookout for nimble motorbikes flanking its sides. I imagine leaning to the left ever
so slightly in my seat while Barnes rides on my footwell, leaning his head out to watch the road
ahead, cruising around that car into the endless wall of traffic and feeling the breeze as the
beckoning school of motorcycles swallows me into the stream.

Quarantine blues: how Hanoians are keeping busy during self-isolation