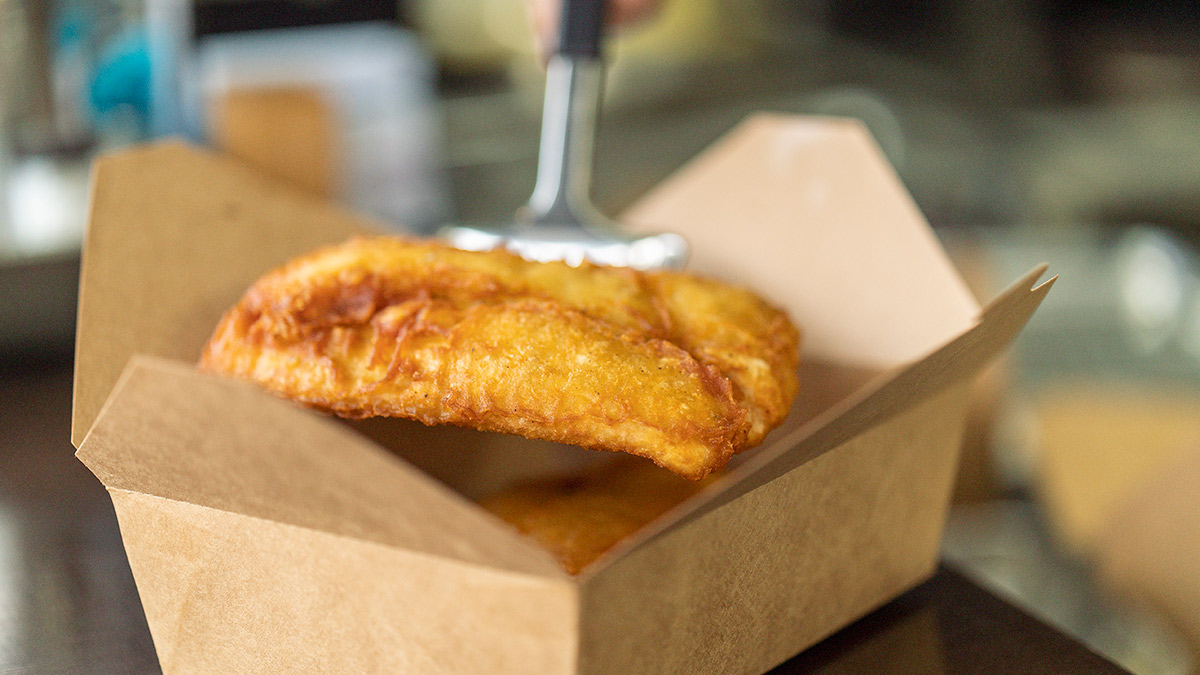 As any Englishman will tell you, there are few dishes quite as comforting as a fresh portion of fish and chips: a large slap of cod deep-fried in batter alongside some chunky fries, all slathered in salt and vinegar. They have been eating it in the UK since at least the 1860s when it soon became a popular meal throughout the Commonwealth and beyond.

You can find decent versions of it various pubs throughout Hanoi but the city has only one dedicated chip shop: Fryday’s Fish & Chips, on Au Co in Tay Ho. The fish and chips here are about as close to the ‘real-deal’ as you are going to find in Asia, and they serve up all the classic sides and sauces too—mushy peas, gravy, curry sauce, baked beans, coleslaw, as well as pickled onions, gherkins and eggs. Hell, if you are in the mood they will even sell you a deep fried Mars bar—now that is legit.

Here you will get a large inch-thick piece of Norwegian cod and a huge portion of perfectly cooked fries for 200,000 VND. For a cheaper option you can substitute the cod for local snapper (140,000 VND). So it came as a surprise when Chào sat down with the owner of Fryday’s to find out he was not a hungry Scotsman pining for food from back home, but a Vietnamese guy who grew up in Bratislava, now the Slovakian capital.

“Yeah, I was born in Czechoslovakia,” says proprietor Tony Anh. “My dad used to work as a translator there. I think my parents were in the newspaper there for being one of the first Vietnamese couples married there or something. But by the time I was 25 I was a backpacker. I lived in London, Sydney, Toronto. So, it was these places that I got my taste for fish and chips.”

“I think I had 26 portions of fish and chips that month just to get everything right. It was non-stop. Every freaking day.”

“I used to have an English business partner and he asked me why I didn’t set up a fish and chip shop, and I thought why not? I guess it is a pretty niche market.”

Finding a recipe to make decent fish and chips is not difficult, but the struggle for Anh was that the ingredients were a bit different in Vietnam, and none of them seemed to quite work at first, so he had to spend pretty much every day for a month trying to nail the recipe.

“I think I had 26 portions of fish and chips that month just to get everything right. It was non-stop. Every freaking day. You cannot just do the recipe by the book here,” he says. “The flour is different. The temperature is different. The beer to make the batter is different. So it took a while. But I had some English friends with me as well a Scottish guy Allen to help. He used to run a catering company and really knows his stuff. He gave me tons of good tips. He is now trying to get me to put a chip butty on the menu!”

Perhaps unsurprisingly, one of Anh’s best customers is the British Embassy in Hanoi, who have used Fryday’s to cater a couple of their events. “Those guys know their fish and chips. Every now and then they will put in an order for about 40 portions for when they have people come to visit and things; the ambassador, Gareth, even gave us a shout out on his Facebook page one time,” Anh says.

The first time Chào tried fish and chips at Fryday’s, the managing editor said it was the best he had tried in years, probably the best he has had in Asia, and he is a Londoner with a minor addiction to junk food.

Only about 10 to 20% of Anh’s customers are Vietnamese. Anh says that the dish is a bit boring for them, and they want spicier sauces and stronger Asian flavors that humble fried fish and potatoes simply cannot deliver.

He has similar difficulties with his chefs. Some of them are very experienced and want to improvise and be creative. They want to add herbs and spices, and put in chilli sauces, whereas classic fish and chips does not usually lean toward such bells and whistles.

“I can see where they are coming from. They are creative people and it is a simple dish, but I tell them ‘No,’” he says. “This is a formula. You cannot muck around with it. It has to be done how it has to be done!”

Make no mistake, this restaurant might be run by a Vietnamese-Slovak but it is not a fusion restaurant or anything close. There are no attempts to add fancy Asiam flavors here. It’s almost surprising to find such an old-school menu. There is an Aussie beef pie and chips (140,000 VND)—yes, the pies are made by an Australian from scratch. There is battered sausage and chips, as well as fishcakes and chips (both 120,000 VND). Older punters might even be a bit upset that the chips are not served up in used newspapers like they used to be. In some ways, Fryday’s even has the edge over some tradiotonal chippys, which often leave their fish out for hours on a warmer. Every portion at Fryday’s is made fresh from scratch.

“The funny thing is, our most popular drink is Coke light. People eat all this fried food that is not good for them, and then, I don’t know, think they can level it off by drinking a light Coke.”

But there is one dish served up here that you won’t find in any fish and chip shop in Britain: deep-fried cheese and chips. Smažený sýr is a dish you will be hard pushed to find outside the Czech Republic or Slovakia, but Anh could not help putting it in as a nod to his Slovak roots. It is exactly what it says: a huge wedge of cheese—usually Emmental or Edam—fried in batter and served up alongside mayonnaise and, yes, you guessed it, chips.

“Anywhere in Slovakia will serve you deep fried cheese, I love it. Either with fries or mashed potatoes. It actually sells pretty well here. People often crave cheese and it is definitely a big chunk of cheese.”

Anh has had almost universally good reviews, but there is one thing that a vocal minority complain about: the shape of his chips. People say they are closer to potato wedges than they are to the rectangular fries they expect. Anh is eager to explain.

“About one in ten people are not happy about the shape of the chips. The thing is the local potatoes here are on the small side so to get the chunkiness I have to cut across them slightly so they come out not the perfect shape for some people,” he says. “Some people say it is not authentic, but we cook them well. We boil them first and then double fry so they should taste great, and people say they do,” he says.

Chào ask Anh what the most popular drink he sells is, expecting it to be beer (they do Yorkshire tea here too), and the response is amusing: “The funny thing is, our most popular drink is Coke light. People eat all this fried food that is not good for them, and then, I don’t know, think they can level it off by drinking a light Coke. Still, whatever they want I guess.”

With its simple upstairs restaurant, easy access window for takeout and crisp beer-battered fish, Fryday’s is without doubt the closest thing you are going to get to an English chippy in Hanoi. If you want cod, chips and mushy peas, doused in salt and Sarson’s vinegar, then this is the place. Chào cannot vouch if it is the best fish and chips in the city, but it is certainly the best we have tried. And we have tried quite a few. Recommended.

L’Oasis: cool off with a few scoops of gelato this summer