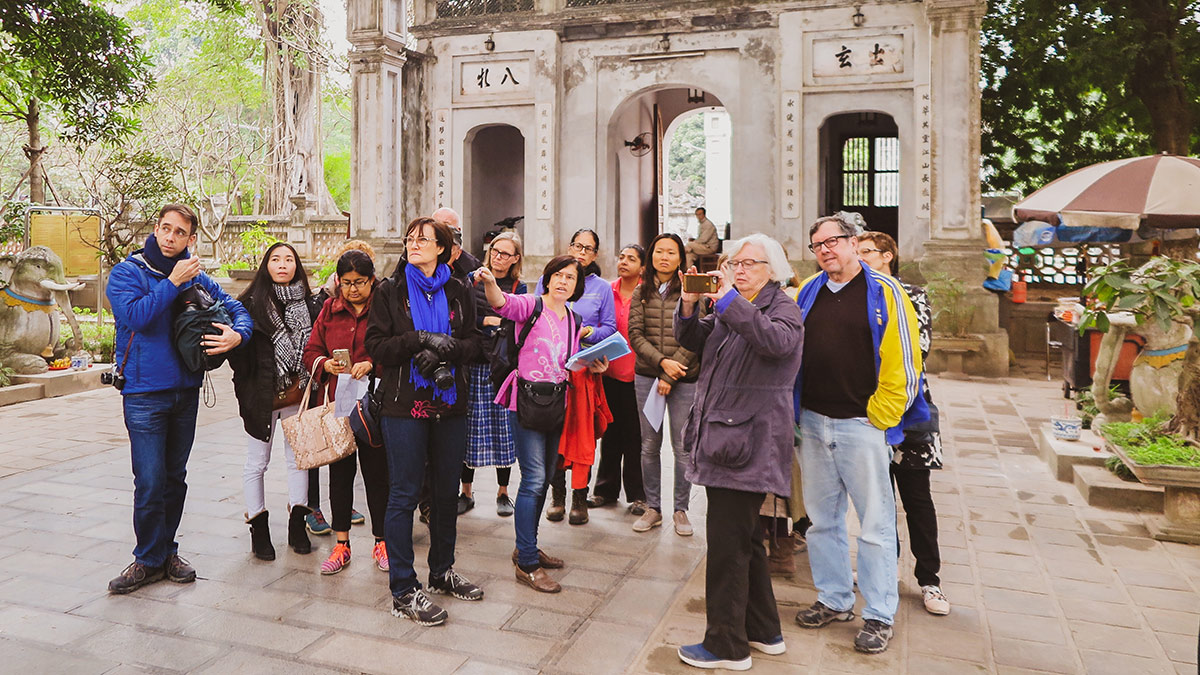 The old trope of the expatriate living several steps removed from their host country, with little knowledge of its culture, history and language rings as true today as ever. Transience, fear, economics and plain ignorance sometimes create a space between new arrivals and locals that can easily become a chasm. But for the last 20 years an informal Hanoi organization has been trying to narrow the gap through a heady mixture of friendship and learning, while trying to teach and help others to understand several aspects of Vietnamese life.

Friends of Vietnam Heritage are a group of Hanoi residents from all over the world, including many from Vietnam, that have an interest in celebrating and preserving the country’s culture by spreading knowledge on any number of areas, from history, film and literature, through to architecture, crafts and food.

The FVH events calendar is a busy one of 10 events per month, which takes in lengthy walks around historic areas of the capital, a book club, a film night, excursions to areas of cultural interest outside the city, and much, much more.

A recent event saw Dr. Tran Doan Lam, editor in chief of The Gioi Publishers, the oldest foreign language press in Vietnam, give a highly-learned two hour lecture on the history of publishing in the country, embracing everything from the nation’s first known writing (ideograms scratched on tortoise shells, used for divination), through to the market reforms of the 1980s that saw modern printing equipment brought into the country.

The end of November will see FVH arrange a Treasure Hunt in Hanoi’s Old Quarter, which will see people searching for clues at important landmarks to solve riddles and carry out fun tasks. All proceeds will go to good causes.

“Not long back, we had the man who designed the 500,000 dong note. He is researching the art work of Vietnamese money. He was great. We must get him again.”

While many expatriate groups comes and go, FVH has just celebrated its 20th anniversary and its success has been partly founded on it ability to effectively integrate with the local community. Almost 20 percent of its 1,300-strong membership is Vietnamese. “There’s no membership fee and anyone can join. We just have small fees for the events,” says Stella Ciorra, a British expat who has been visiting Vietnam for 24 years, who serves as the vice chair of FVH. “We will do all sorts of activities and we will try anything our committee suggests, as long as it fits our brief.”

Over tea, smoothies and cake in a café beside Hanoi’s St. Joseph’s Cathedral, Chào sat down with Ciorra and FVH Chairman John Reilly, a gentle Native American expat with the relaxed demeanor of a retired surfer, who has been involved with the organization for 19 years.

Reilly was not involved with the founding of the group, joining a year later, but explains how it all started. “A woman who came here who was visiting lots of craft villages and many of her friends wanted to go along, so they did,” Reilly says. “And a friend of hers who was from a heritage group in Chicago wanted to be involved, so they used the same model and started a little newsletter, and it just took off from there.”

“I have never been on an event where the atmosphere was bad or I didn’t get on with someone. People find other people they get on with. We even had our first wedding. They met on an FVH excursion. They were working here and got married!”

Whilst there are numerous cultural events and lectures, it is the historic walks around the city that seem to be the mainstay of FVH. Some are in Japanese and arranged for the Japanese people in the city, and many are in English. They cover a broad number of areas, including the Old Quarter, traditional medicine, temples, the Citadel, the French Quarter and Hoan Kiem Lake.

As long as it focuses on enhancing and deepening understanding of Vietnam’s culture, FVH is willing to arrange a corresponding event. “We will host any experts who can deliver a talk,” Ciorra says cheerfully. “Not long back, we had the man who designed the 500,000 dong note. He is researching the art work of Vietnamese money. He was great. We must get him again.”

The transient nature of the expat community means the 12-member committee is often in flux, but it retains its heart and commitment to heritage.

While it is clear that heritage, history and preservation are the organization’s raison detre, there is a strong social element to the group, with the various events allowing people to build up friendships over many years. “A typical event has quite a few people that know each other, and a few new people will turn up too. But I have to say I don’t think I ever been on an FVH walk where anyone has irritated me. Everyone gets on,” Ciorra says. “I have never been on an event where the atmosphere was bad or I didn’t get on with someone. People find other people they get on with. We even had our first wedding. They met on an FVH excursion. They were working here and got married!”

In many ways the group is in flux itself. Not everyone gets involved for as long as Reilly and Ciorra who look set to stay in Vietnam for the long haul. “I will be here forever I’m sure. In an old people’s home probably,” Ciorra jokes.

“Our preservation is more about teaching and knowledge. So it is important for us to get Vietnamese people to be involved. As it is their country after all.”

The transient nature of the expat community means the 12-member committee is often in flux, but it retains its heart and commitment to heritage. “We have seen a lot of people leave, but then a lot of people also come back because they are in love with the place, and the Vietnamese are very loving people,” Reilly says.

As their name suggests, friendship and collaboration with the Vietnamese people is absolutely crucial to the organization, and Reilly and Ciorra constantly make it clear just how much the Vietnamese people have helped the group by letting them into their lives and work in order to help, teach and educate others.

“Our preservation is more about teaching and knowledge. So it is important for us to get Vietnamese people to be involved. As it is their country after all,” Ciorra says. “They are so accepting, so friendly, so willing to share their knowledge and trade. I think a lot of people in England would be less keen to share. We can go almost anywhere. We can just rock up at a village and people will invite us to share and teach us about what they are doing.”

With their commitment to friendship and the preservation of culture, it will come as no surprise if FVH stays around another 20 years, adding to and adjusting their events, learning more and more. And long may they continue. “That’s the fun thing about FVH. We get to experiment and explore. We visit villages, and see people’s life and work. We are really lucky,” Reilly says.

Related Topics:EducationHistoryVietnamese Heritage
Up Next