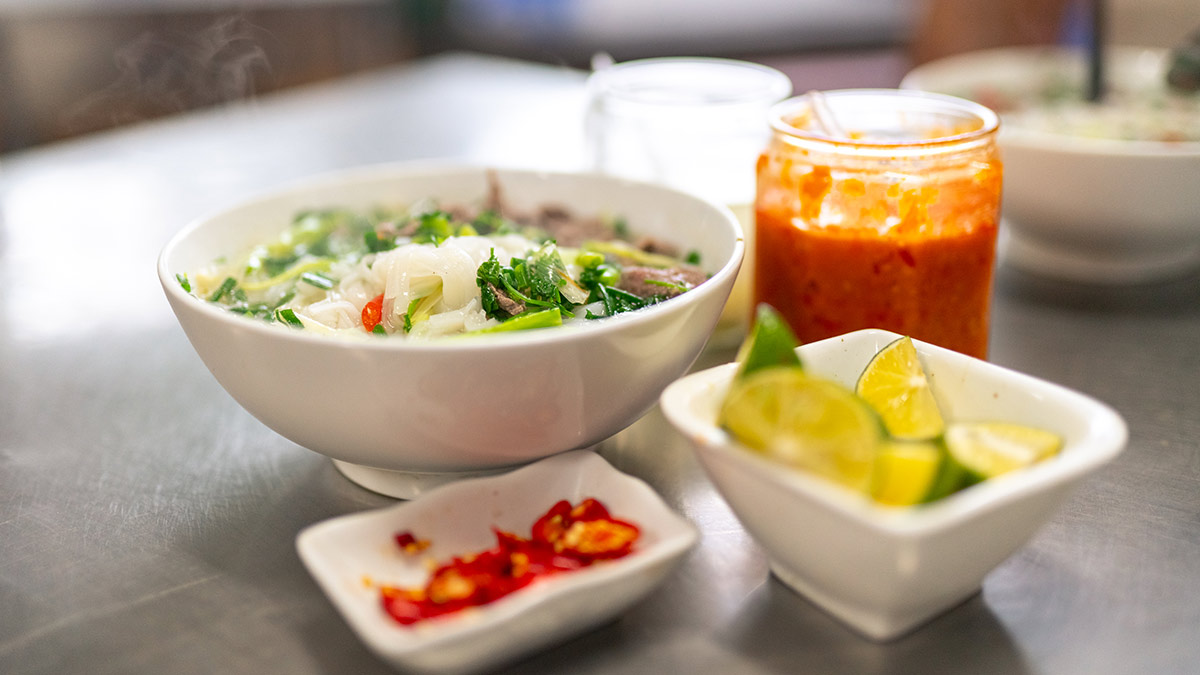 It’s hard to think of Vietnamese cuisine without thinking about pho: a dish so renowned it’s laced into the national psyche–the pride and joy of locals countrywide. Yet despite its soaring international popularity, most are only aware of the regular chicken or beef noodle soup. Though iconic and undoubtedly a comforting breakfast, an insomniac’s dreamy late night broth or a curative elixir for anything from bed-ridden sickness to a pounding hangover – they can prove a little repetitive.

If you’re yearning for something a little more adventurous that the locals know and love, there are a fair few more options than you think, though all have one thing in common: bánh phở present as a base—of course, paired with classic harmonious Vietnamese combinations. You will often spot diverse flavors and textures: fried onions, chewy beef tendons, golden fatty chicken-skin, crispy noodles. On paper, the buttery richness of one ingredient paired with the springy quality of another seems to make up for a jarring, overcrowded melting pot, yet, upon taste, it just makes sense. Without further ado, let’s take you through different takes on this classic national staple.

Or as we like to jokingly call it: pho deconstructed. Here, the soup is separated into a smaller bowl, unlike the usual routine where it’s lathered over parboiled rice noodles and chicken bites. Instead, the vendor will mix in a delicate balance of soy sauce, sugar, kumquat and chicken fat to give the dish some savory, spicy edge. Top it all off with some garnish and voilà, this pho deviation will prove irresistible.

Rumored to have come into existence back in the 90s as people could no longer stand to have a piping-hot bowl in the sweltering heat, yet still craved for their pho fix: mixed pho is the perfect option for saying goodbye to Hanoi’s long hot summer.

Witness the lovechild of your freshest spring rolls and beef pho. Here, the steamed rice-flour noodles aren’t thinly sliced, but left in larger sheets to effectively replace the rice wrappers, rolling up the pieces inside nicely. Fillings usually consist of stir-fried minced beef, lettuce, cilantro and shredded carrot, served chilled. For this simple summery dish, the most complex and hard-to-perfect component is actually the bowl of nước chấm – a Vietnamese dipping sauce – made up of more ingredients than the roll itself, namely fish sauce, sliced carrots, green papaya, rice vinegar, lime, chili, sugar and various extra seasoning.

The birth of pho cuốn is a humble one risen from a state of utmost emergency: what to do when your pho joint has run out of broth? According to myth, upon a customer’s late night arrival, a quick-thinking vendor came up with the idea to roll out the rice noodles and throw whatever was left of the ingredients in there! The story originates in Ngu Xa street, and to this day the entire vicinity is riddled with restaurants selling the most famed pho rolls in the city.

The most eye-catching variation of the fried-pho family, the “pillow” pho gets its name from the unique shape of the puffy rice noodles. Two rice noodle sheets naturally stick together when placed on top of one another, then when deftly cut into square pieces and set in hot frying oil they naturally puff up! Crunchy on the outside, they retain their chewiness, and never comes across as overtly filling as the middle is mostly hollow (gotta leave room for a cooling drink afterwards). On top, the dish is laden with a generous mountain of spinach or bok choy, sauteed beef and carrots ideally that have been previously tossed on an open fire.

For the most part, any restaurants that sell the pho rolls will sling deep fried pho, a bona fide combination of the fresh and the greasy go perfectly hand-in hand. We recommend you bring a group of friends to be try both these hearty dishes together.

As the name suggests, this dish is made in classic East meets West fashion. We love the Vietnamese adaptation of the baguette; we have tasted and taken to escargot; now meet the Viet version of Bœuf Bourgignon. It’s rumored to have been introduced to Vietnam in the 19th century during France’s occupation.

This bad-boy is similar to your everyday beef pho, with a small twist. Even from afar, the inviting waft is mouthwatering, and for some this dish is love at first scent. Thyme sprigs and bay leaves are replaced with cinnamon, star anise and cardamom. The broth bleeds in gorgeous shades of orange, blending in with beef tendon – the best meat cut for this recipe.

Be warned, don’t expect to get even remotely drunk off of this dish, as it mimics the ‘red wine’ hue mostly with the help of turmeric powder. Only a minimal amount of alcohol is utilized (if any at all, we suspect), just enough for a dash of extra warmth. This winter favorite is mostly preferred in the morning due to the high protein content offering energy for a new day.

Leave the long-running debate on Hanoi pho vs. Saigon pho aside (we know Hanoi wins after all), and come take a bit of a breather with this lesser-known incarnation: sour pho! Originating in Lang Son Province, a northern area bordering China; this regional favorite earns its name from its tarty sauce that’s been infused with vinegar. The dish is often said to resemble a warm noodle salad rather than a soup: laid down first are wide slices of flat rice noodles engulfed in special sweet-n-sour dressing (word has it the richness comes from roasted duck fat.) Then, the ingredients are piled on top, its combination unlike any other dish here in Hanoi: we’re talking toothpick-sized fried sweet potatoes, pig liver, Chinese sausage, barbequed pork, duck meat, crumbled peanuts, fried shallots and chopped cucumber as garnish for that extra tinge of freshness.

Despite its heavy-description, the dish is quite light and digestible. If you are ever invited to a wedding in Lang Son, look out for the sour pho that’s invariably served as a light entree. Unfortunately, in Hanoi, choices are far and few between. Hopefully, the restaurants below will live up to the name and fame of this toothsome delicacy.

Yes, you read that right. The famed burger chain has recently released an exclusive pho burger. Its response has been, well, rather mixed, to no one’s surprise. After all, trendy western takes on Vietnamese food have often received skeptical feedback from those who don’t like bastardizing our wonderful dishes (pho cocktails?). So, is it any good? While we applaud the efforts to include Southern pho herbs – cilantro, onion, basil – the beef patty itself leaves much to be desired. As Duyen, a young said: “This tastes just like Vifon’s instant pho, right?” At twice the typical price of a bowl of pho, this burger edition might not make it to most people’s list of regular favorites. Maybe it works as a one-off experience with friends, but if you really have to give Uncle Ronald a visit, you might be better off sticking with a Big Mac.