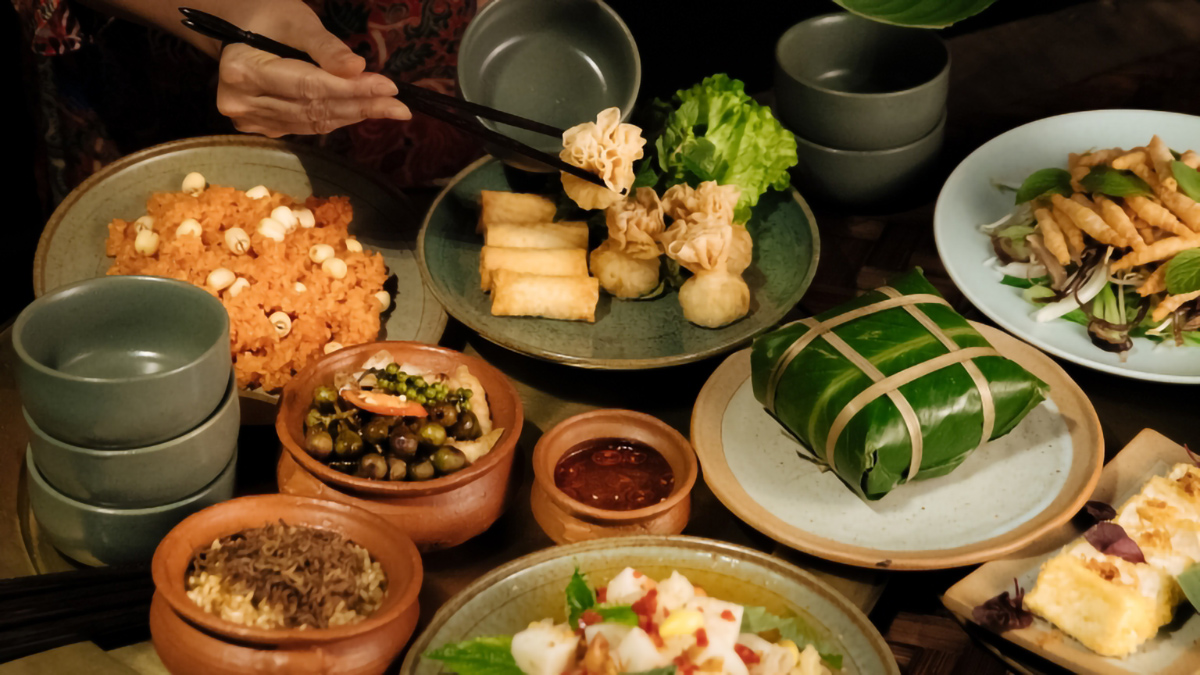 By its own admission Sadhu is a restaurant aimed at those who want to “shy away from all the noise and chaos of the world outside.” The restaurant in Hanoi’s Old Quarter is a popular choice, attracting gazes from passerby due to its striking outside decoration, while providing a truly excellent mid-range ‘vegetarian buffet.’

The term buffet is slightly misleading here, as you do not go up to a counter and individually take your food, but order in regular restaurant-style from the table. It’s perfect for the lazy that want their meals brought to them, but still want the large range of choice and the all-you-can-eat ethos of a buffet.

At just 240,000 VND per person, you can access to an incredible array of some 50-plus expertly-prepared dishes, with the menu ranging from the more common to a slew of ingredients and food you have never heard of: a mishmash of traditional food from regional Vietnam, as well as some foreign classics such as pizza or massaman curry

What particularly sets Sadhu apart from many other vegetarian restaurants in Hanoi is its atmosphere. From the open space that utilizes fresh air and sunlight to the Buddha-styled decoration, every little detail is carefully crafted and matched to elevate the culinary arts created here. It does not feel like a buffet restaurant at all.

As the name suggests, Sadhu is a restaurant that focuses on calm. There’s tranquil music with the occasional melodious sounds of Mokugyo and Tibetan music bowls, and everyone here respects each other’s space enough to talk and walk quietly, and it goes without saying that the food is of a much higher quality than you get at your average yoga retreat.

“At Sadhu virtually every dish brims with effort and creativity as well exuberant flavors and textures.”

The food portions are sensibly customized to the number of people eating, so our large group ended up going through about half the menu. The greenish bamboo shoot soup is one of our favorite appetizers, successfully delivering a creamy earthy taste and going well with the crispy bread. There is a superb salad selection of which the Thiet Quan Am the standout dish. Inspired from the banana blossom salad usually seen in Vietnam’s rural areas, it has the perfect combination of peanut and laksa leaves to bring out a bittersweet, slightly spicy flavor. Other salad dishes such as Truong Xuan and Jícama are refreshing in taste, but a little on the bland side.

Some dishes are so good here we ordered twice, such as the Cuon om, or vermicelli spring rolls. The stuffing, which includes tofu, pineapple, cucumber and other common herbs, creates a naturally sweet taste and a little bit of crunchiness. It is nutritious, contains almost no fat and is not too densely herb flavored when compared to the more pungent Sadhu Pho spring rolls.

Additionally, a must-try and something of signature Sadhu option is the Hue dumplings tray, or Banh Thanh Noi set. Each item is named after one the most honored pagodas in Hue, and they provide exquisite vegetarian versions of fern-shaped cake (Banh beo chen), fried sticky rice pancakes (Banh ram it), flat rice dumplings (Banh nam) and tapioca dumplings (Banh beo): a truly excellent vegetarian dumpling party.

The buffet is open until 10 p.m. but large groups are best making reservations, especially during the first and middle days of the lunar month. This is legit, fresh vegetarian food, with no ‘fake meat’ in sight. At Sadhu, virtually every dish brims with effort and creativity as well exuberant flavors and textures. Even the most ardent meat-eaters would be hard pushed not to find several dishes here that they could not get along with. Recommended.