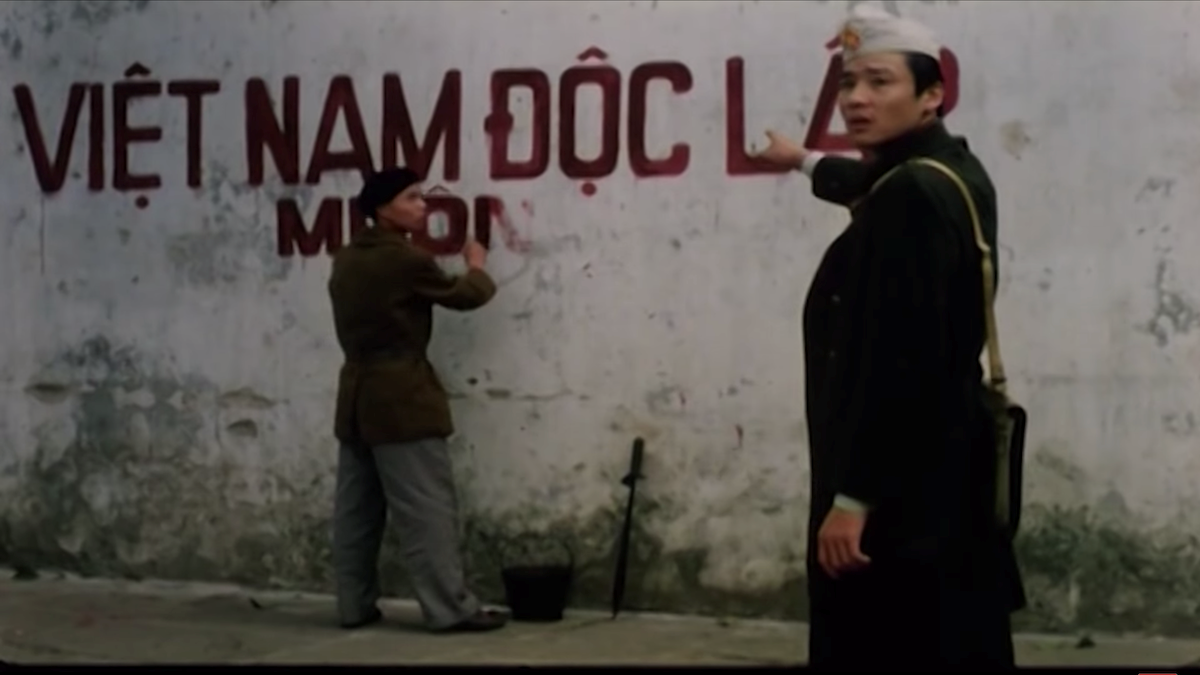 Ho Chi Minh has one of the most cinematic lives in Vietnamese history. As a globe-trotting scholar, sailor, poet, pastry chef, and passionate revolutionary, Uncle Ho’s cheerful visage can be seen in most classrooms and offices across the nations, but very few films feature Vietnam’s first president.

Fortunately, director Dang Nhat Minh gives us a glimpse of Ho Chi Minh in the 1996 drama, “Hanoi: Winter of 1946.” The film is set during the prelude to the Battle of Hanoi, which incited Vietnam’s ambitious revolution against the French empire. Ho Chi Minh himself is not a central figure. Rather, the film’s drama exists around average citizens, sympathetic to Ho’s wish for an independent Vietnam.

“I have one earnest desire,” he says, half of his face lost in shadows, “to achieve complete independence for our country, complete freedom for our people, opportunities for all our countrymen to have adequate food, clothing, and education.”

The portrayal of the former president is peculiar for a historical war film. Instead of portraying the leader as a strong, seemingly immortal patriot a la Captain America, Tien Hoi, the actor who plays Ho Chi Minh, depicts the Vietnamese leader with humility and reserved grace. In fact, during one of the initial scenes featuring Ho Chi Minh, the president is lying in bed, sick with complications from malaria. This is true to the history, whereby Ho had to rely on General Vo Nguyen Giap to carry out the initial attack on the French, as the president recovered from his illness.

Even stricken with fever, the revolutionary father of the nation is still a force to be reckoned with. In an early scene, Ho struggles out of his bed to meet with a French diplomat like a solider returning to “a warzone.” Director Dang Nhat Minh and actor Tien Hoi put emphasis on Ho’s shrewd statesmanship in the face of imminent war. The biggest conflict facing Ho is the internal and political struggle to keep the peace while simultaneously preparing his country for war. Many scenes feature Ho in his presidential office, writing speeches to either rouse or reassure a conflict-riddled Vietnam.

In one tragically poetic scene involving clever blocking, Ho tells of his desires for Vietnam directly to the camera, as if he is speaking to Vietnam itself. “I have one earnest desire,” he says, half of his face lost in shadows, “to achieve complete independence for our country, complete freedom for our people, opportunities for all our countrymen to have adequate food, clothing, and education.” Ho Chi Minh continues, imagining a peaceful future for himself that he would never live to see: “For me, after finishing my work, I just wish to live in a small house close to nature, where I can go fishing and plant some flowers and make friends with old lumberjacks and youngsters who look after the buffaloes… and have nothing to do with fame or wealth.”

Vietnam’s spartan film industry of the 1990s was not able to produce the high action caliber seen in American war movies concerning the war. While the scenes shot in the daytime are rampant with fear, shock and anger, most of the action takes place during nighttime guerrilla-raids. The poor lightning in these action scenes casts the majority of the screen in pitch-blackness, reminiscent of the infamous final battle against the Night King in the HBO series “Game of Thrones.”

The film does not glorify the destruction of Hanoi but rather depicts it as a necessary evil against the years of injustices wrought by the oppressive French colonists.

Nevertheless, the drama is still effective despite its technical flaws. For example, when Ho orders for bombs to be detonated in Hanoi, far-off explosions can be heard as the capital city plunges into darkness. This happens at the exact time in which a soldier’s pregnant wife is being operated on by a French doctor. Instead of featuring the bloodshed on a poorly light soundstage, Dang Nhat Minh opts to ground the action in an unlit operating room, causing the rising tension to become distinctly personal rather than solely political.

The destruction of Hanoi is a bittersweet portrayal, the imagery in the climax devastatingly memorable: such as an unfinished painting of an artist’s girlfriend in an áo dài, young Vietnamese soldiers joyfully singing as they die from French gunfire, or a soldier’s rushed goodbye to his wife and newborn baby.

The film does not glorify the destruction of Hanoi but rather depicts it as a necessary evil against the years of injustices wrought by the oppressive French colonists. American viewers will find this film touches on some modern issues, as the United States currently grapples with the continued riots as a response to the never-ending police brutality. Destruction of property is never pleasant but is sometimes the only acceptable action against a cruel and unjust government.

“Hanoi: Winter of 1946” ends with Ho Chi Minh and his fellow revolutionaries marching into the northern Vietnamese wilderness, living in exile from their beloved Hanoi for nine years. For many non-Vietnamese, this piece of history is seldom told in the history books. Fortunately, Dang Nhat Minh’s film immortalizes the brave efforts of Ho Chi Minh and the Viet Minh army.