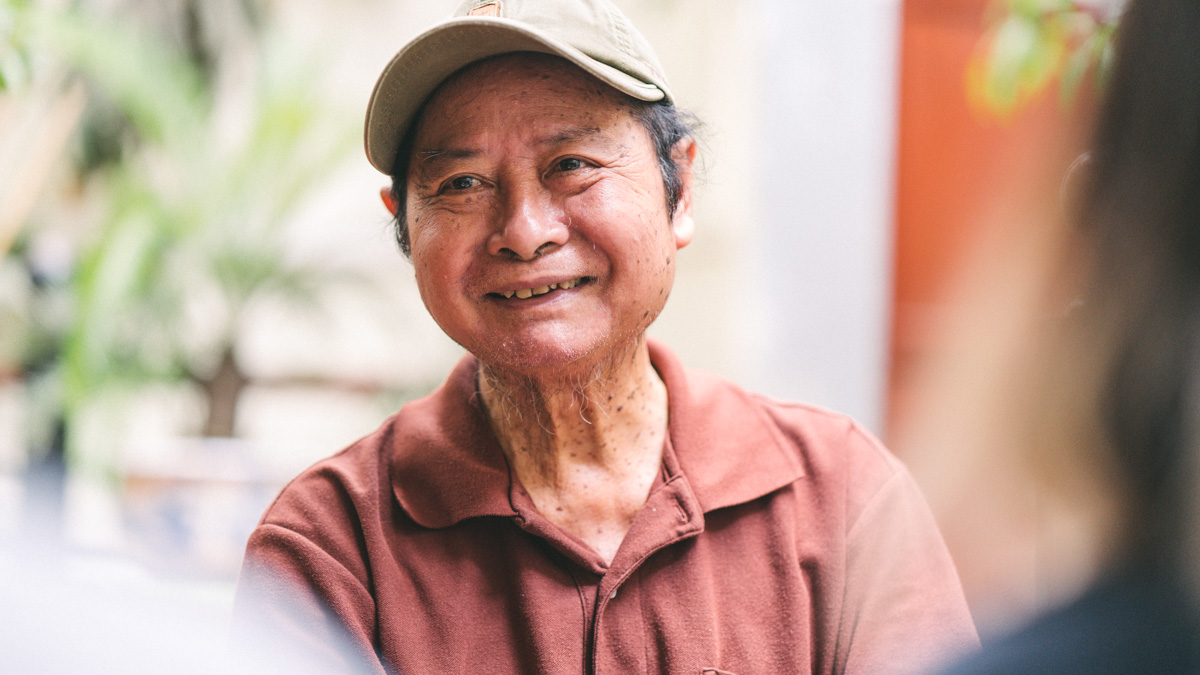 Those who have spent any time in Hanoi know that the best joints in town are hidden hideaways, those that barely beg attention at first glance. And so it is with Café Giang, one of the cities ‘four pillars of coffee,’ legacy coffee-houses (see also, cafes Nhan, Nhi and Di), which almost seem to define the drinking culture of the city itself, which is surely Asia’s coffee capital.

Café Giang is not Hanoi’s oldest coffee-house, yet it has still been open since 1946 and in some ways is part of very fabric of the capital’s history. The entrance is wedged between two standard-sized shops, and you have to nip down a back alley with just enough space to enter in single file. It’s in these humble confines that we meet proprietor and coffee expert Nguyen Van Dao, with his soft eyes, gentle demeanor and faintest wisp of a beard, he welcomes us with a grandfatherly smile and ushers us upstairs to his aged coffee-lair.

Come up, come up,” he says. ‘“Up here is much more relaxing.” And so it is. There’s a surprisingly spacious seating area and even a mini open-terrace, where you can make out the faint hustle-and-bustle of the city below.

“The Vietnamese don’t like their coffee black, so my father took a leap of faith and decided to put egg yolk into the drink.”

Dao is no spring chicken. In fact, he is as old as the coffeehouse itself. Though he didn’t join the family business until his 30s, as he had a previous career as a marine engineer. Sitting down over mugs of piping hot coffee, his eyes brighten as he starts to talk about the café and its storied history. The old man suddenly seems like a young boy, beaming in quiet unadulterated joy. It’s his café’s family that created one of Hanoi’s most famous beverages, a drink that can be found in few other places in the world: egg coffee. And he delights in telling us of its origins.

“The year was 1946 and it was a time of ongoing warfare and rampant famine in Northern Vietnam. Finding milk – let alone being able to afford it – was an impossible feat!” Dao tells Chào. “Even for my father, Giang.”

Dao’s father Nguyen Van Giang was something of a minor celebrity in his day, an esteemed bartender working at the iconic Sofitel Legend Metropole Hotel, visited by such luminaries as Graham Greene and Charlie Chaplin.

“The Vietnamese don’t like their coffee black, so my father took a leap of faith and decided to put egg yolk into the drink,” Dao says. “This was a radical idea! It was an immediate hit, and the people loved it.” The egg concoction became so popular that it quickly surpassed the much-beloved Vietnamese iced-coffee, and thus, their family café was born.

“It was like guerrilla warfare, you know,” Dao chuckles. “We kept opening and then closing. If it felt like the authorities weren’t in support, we’d hit pause on our café to align with the wartime’s priorities.”

Dao’s excitement at the drink his father popularized is so intense that Chào’ feels compelled to order a round, and we quickly do so. As we take our first sip, any doubts about the seemingly incompatible combination vanishes. Dipped in a small bowl of warm water to sustain its heat, the scent steaming from the cup of hot golden goodness is heavenly. The flavor is sweet enough to fool you into thinking it’s a dessert, that is, until the strong distinctly Vietnamese caffeine kicks in with a bang. We stay silent for a while, simply sipping on warming drink, enjoying the moment for what it is. Drinking coffee as it should be drank. For those that want something a little extra to the creamy caffeine rush, there’s even a superb rum version too. Egg coffee with rum, truly a drink of the gods.

Despite the surging popularity of Café Giang’s brews throughout the 20th century, business was not always smooth. Any crash course in Vietnam’s turbulent history shows why. From France’s colonization leading to the First Indochina War (1946-1954) through to the infamous Vietnam War (known as the American War), conditions were rarely ideal for a humble café to operate.

Yet with so many years passed, Dao looks back on the turmoil with, well, not quite fondness, but good humor at least. And he relishes talking about the cat-and-mouse game they had to play with authorities, not to mention avoiding the ever falling bombs. “It was like guerrilla warfare, you know,” Dao chuckles. “We kept opening and then closing. If it felt like the authorities weren’t in support, we’d hit pause on our café to align with the wartime’s priorities. Unlike now, cafés were a rare sight back in those days, but we survived it all.”

“Some have even say, ‘if you travel to Hanoi and never try the egg coffee, have you even been there at all?'”

Naturally, coffee is Dao’s great obsession and he talks about it at length, going into the details of the technique to make it, where to source it, and what makes a good cup. The beverage has been an inspiration to all those close to him.

“This little beverage has nourished and fostered my entire extended family,” he says. “It’s my only job now, day after day, but it has never once bored me.”

When asked the secret as to what has given his drink such an excellent reputation, Dao insists it is all about the quality and the fact he used a mix blend of unique beans. “I use Liberia for its richness, Arabica for its fragrance, Robusta for its intensity. They have distinct profiles.” To coffee aficionados like Dao, the differences are obvious and just jump out. To laymen likeus, it just tastes like superb coffee. But Dao is animated and wants to talk egg coffee again and the its effect on all those who try it. He claims it has powers to charm pretty much everyone and anyone on the planet, even the choosiest of coffee drinkers.

“I’ve had customers, both local and from abroad, come in and say this is the best drink they’ve ever had. Some have even say, ‘if you travel to Hanoi and never try the egg coffee, have you even been there at all?” he says beaming. “When I first heard that, it stopped me dead in my tracks. There is something in the quality of the drink, I suppose, to make them say such a thing.”

Aside from coffee, of which Dao can seemingly talk about for eternity, the city of Hanoi is his second great love, and he is quick to tell us that he is a “child of Hanoi,” and has resided here his whole life. He couldn’t conceive of living anywhere else. After all, he is part of the city’s history. Indeed, many of the best stories in the city are not to be heard but tasted.

For as long as coffee has reigned supreme in the capital, Dao and Café Giang have been along for the ride, witnessing the city’s ups and downs over a warming cup of the black stuff, with rum, egg or without. It’s already been around 75 years, and we wouldn’t bet against it being here 75 more.