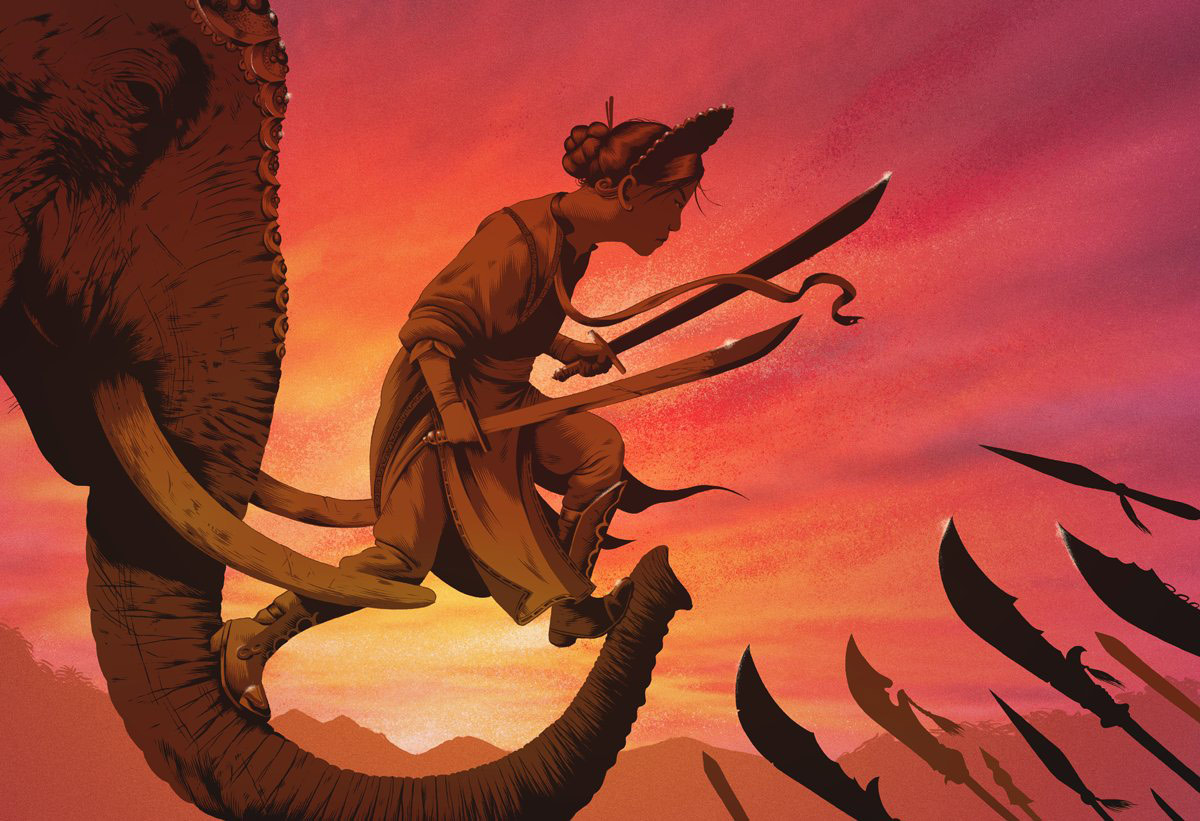 Some choose to go into battle on foot, while others choose horses, but for Vietnam’s third century female warrior Ba Trieu (225–248), only a white elephant would do. That was just the way this fearless fighter rolled: slaying soldiers and laughing in the face of gender stereotypes. Lady Trieu has had such a monumental impact on Vietnamese tellings of history that nobody fully knows where the facts end and myths begin. Indeed, no one is even sure of her original name.

Often known as Trieu Thi Trinh or Trieu Trinh Nuong, by some accounts she is said to have been 9-foot-tall, with 3-feet long breasts that she would sling over her shoulders as she roared into battle astride her gigantic war-elephant. What is known is that in the early third century, for many months she led a rebellion fighting off the Eastern Wu, a state of China occupying much of Vietnam.

Born in a village near the Nua mountains in Cuu Chan, Giao Chau District, in what is now Thanh Hoa Province, Trieu’s childhood is said to have been so tough it filled her with a desire to be stronger, fiercer and more independent than any of her peers. Orphaned young, she grew up with her brother Trieu Quoc Dat in an era of turmoil, with the Vietnamese living under intense Chinese suppression. When asked as a child, of her future plans, she simply said: “I want to grow up and fight the enemies like Trung Trac and Trung Nhi!”

Ba Trieu grew up in China’s chaotic Three Kingdoms period in which the Eastern Wu dominated many Vietnamese territories, viciously exploiting human labor, natural resources and accumulating wealth wherever it could. This instilled the future warrior with such a deep sense of vengeance that by the time she was 19 she had taken refuge in a mountain forest to hone her combat skills and consolidate her future combat forces.

“Why should I imitate others, bend my back to men, stoop over and be a slave? Why resign myself to menial housework?”

Her charisma, wit and resilience soon saw her gather many loyal followers, with her acts of bravery frequently astounding them. Legend has it that when a fierce and wild and elephant roamed free terrorizing villagers on a mountainside in Cam Truong village, Ba Trieu took the situation into her own hands, driving the beast into a swamp, jumping on its head and taming it, before going on to use the colossal mammal to take her into battle.

Despite hating Chinese oppression, Ba Trieu’s relatives were wary of her plan to rebel. They wanted her to settle down and live a “normal life,” and it was when her brother begged her to fall into line that she uttered her most famous words (of which there are many versions), which have inspired many generations of Vietnamese women: “I only want to ride the wind and walk the waves, slay the big whales of the Eastern sea, clean up frontiers and save the people from drowning. Why should I imitate others, bend my back to men, stoop over and be a slave? Why resign myself to menial housework?”

All came to respect her bravery on the battlefield, and the insurgent troops unanimously elevated Ba Trieu as commander-in-chief, as she continued pushing back the Eastern Wu army around Thanh Hoa.

By now elected as General Nhuy Kieu, various Vietnamese accounts describe her as a legendary immortal cladded in a golden robe with a gold pin through her hair, always riding her favorite elephant on the front line, possessing the loud and clear voice of a temple bell, vast physical appetites and a beauty that could “shake a man’s soul.”

Everywhere Ba Trieu went, she intimidated her enemy, and she even successfully killed the tyrant governor Giao Chau. It is reported that the Eastern Wu soldiers were so frightened of her that they would often say: “It is easy to handle the spear to attack a tiger, but facing the Queen, how it is difficult to fight.”

After Ba Trieu’s many successful battles and advances, it is said that Sun Quan the Eastern Wu Emperor was becoming humiliated at the constant defeats from a female warrior, so poured vast resources into crushing the rebellion once and for all, including a unit of 8,000 seasoned soldiers led by Inspector Lu Yin, a military general coming from a war-hardened and powerful family in the Wu kingdom. After battling for half a year and managing to bribe many insurgents, Lu Yin was finally able to push Ba Trieu’s troop back. But still she refused to surrender, preferring to commit suicide by throwing herself into a river than be captured. Today she is sometimes referred to as Vietnam’s Joan of Arc, but it would be more fitting if Joan of Arc was referred to as France’s Ba Trieu.

A legend is born

Trieu’s legacy is such that many streets throughout the country are named after her, including here in Hanoi, and there are many folk songs about her imprinted in the hearts and minds of the Vietnamese people:

Sleep, sleep tight my child
So that I can fetch water to wash the gilded saddle of the elephant
Climb the hill if you want to see
General Lady Trieu on her golden gilded seat

During the early Ly Dynasty in the sixth century, recognizing Ba Trieu’s loyalty and courage, King Nam De awarded her the highest title in the country “Truest and Bravest First Lady.” He also authorized the construction of a temple to honor her in Thanh Hoa Province, and her tomb sits at the foot of Tung mountain around 500 meters from the temple. Every year on the anniversary of her death (Feb. 22nd in the lunar calendar), a festival is held her to commemorate and worship her.

Ba Trieu’s story epitomizes Vietnam’s heroic resistances against foreign invasion. Her legacy has inspired many women to both stand up against the enemy during war time and to challenge gender roles wherever they can. This badass woman of Vietnamese history will never be forgotten.