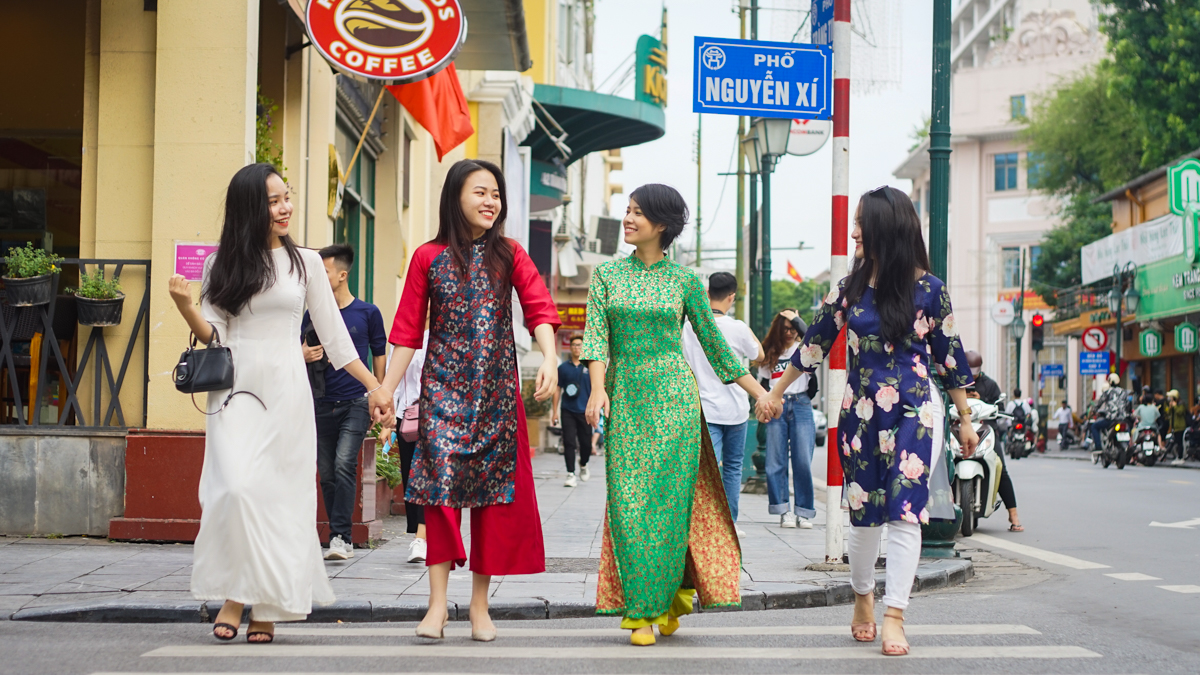 Earlier this month various member of the Twitterati flew into a rage (don’t they always?) when a Chinese competitor at the Miss Earth beauty pageant dared to wear an ao dai, the most Vietnamese of outfits: “Have they got no shame?” “I would have stayed neutral, but she did wear áo dài for real…” “Trying to steal something again? Talk about cultural imperialism!” Apparently, all this anger was justified as the segment was promoting one’s own culture and heritage–thus Miss China was dubbed a thief.

A complicated history means it is never too difficult for Vietnam to get into a slanging match with its Northern neighbor over ‘who owns what,’ with fury quickly spilling in every direction.  And so a new hashtag was born: #aodaibelongstovietnam. But since its dawn, the ao dai has often been politicized. Before becoming the body-hugging fit we know today, the outfit went through a wild ride of its own, having revamped itself on numerous occasions, partly for practical reasons but always under the influence of ever-changing cultural values.

Proto-Ao dai: born in a divided nation (18th century)
Truth be told, there’s no sure-fire way to confirm the precise origins of the ao dai, though be braced for a fiery debate around these parts if you argue the gown has Chinese roots. It is said the first prototype was the Ao giao lanh, generally believed to have first shown up nearly 300 years ago during the last Nguyen Dynasty in Southern Vietnam. There was tension between the North and the South, and Lord Nguyen Phuc Khoat wanted to distinguished his courtiers from those under Lord Trinh of Hanoi, and so had them wear long trousers underneath their lengthy silk gowns.

A more poetic take says that each panel represents one of the Confucian Five Constant Virtues: benevolence, righteousness, propriety, wisdom and faith.

The outfit was heavily influenced by the clothing of the Champa, who once ruled over the land that’s now central Vietnam. The soft and well-fitting nature of today’s ao dai is nowhere to be found in this original design, which formed a boxy, loose silhouette with a simple scarf wrapped around the waist to tie the whole look together. Elegant? Maybe. Sexy? Not really.

Ever more panels (19th – 20th century)
Later the dress took on a more ‘tattered’ look with the development of the Ao tu than. The bottom panels here are not divided in two, but four. For convenience, the two split panels in the front could easily be tied up when moving about, and the tunic was often in darker shades as a subtle camouflage for any possible trace of dirt. Farming is dirty business, so this design was geared towards lower-class women who spent their days doing back-breaking work in the fields.

Today, one of the rare occasions these four-panels gowns see daylight is during traditional Quan Ho performances, an ancient Northern folk-singing style that was once a way for the men and women of neighboring villages to meet each other and, shall we say, make friends.

In what seems like a battle to one-up each other with ever more flaps, the Ao ngu than soon arrived with not four but a five-panel tunic. This new variation was a favorite among the aristocrats of the day, made of lush materials such as vai gam (a type of silk). Taken at face value, the extra flap symbolizes wealth and is worn as a symbol of status, but a more poetic take says that each panel represents one of the Confucian Five Constant Virtues: benevolence, righteousness, propriety, wisdom and faith. Yeah, this outfit has layers.

Ao dai talks politics (1930s – 1970s)
The early 20th century sees the ao dai take a drastic turn, shedding its demure shell for something funkier and at times more risqué, under the influence of French fashion. Dubbed the Lemur (Ao dai Lemur), this ao dai starts to resemble the current version with two flaps and a slight emphasis on the waistline, giving it a more refined flair. This European riff refreshed the traditional tunic, introducing puffed up shoulders, an exposed neck and decorative bow. But the style only truly blew up when Vietnam’s last empress, her Imperial Majesty Nam Phuong took a liking to the gown in the 1930s. Whether in diplomatic meetings or at public events, she loved the Lemur like no other. Always a beloved queen to her people, the public’s affection quickly transferred to the tunic, and further cemented the ao dai into the Vietnamese consciousness.

Many prominent female political figures followed suit, wearing their own versions of the ao dai, which soon became a patriotic symbol. By the time the 1950s and 60s rolled around, the garment had its first flirtations with controversy when Tran Le Xuan (wife of the then President’s right hand’s man, Ngo Dinh Nhu) dared to stray a little too far from the original silhouette, with a more revealing, wide boat neck (Ao dai ba Nhu), which was deemed too sexual by the conservative masses. Traditionalists argued that exposing just a touch of flesh would instantly rid the gown of all its subtle charm. Perhaps they were right, but looking back it is clear that this rendition was a revolutionary moment in Vietnamese fashion, and is still popular today for its casual, breathable design.

It was also during these tumultuous decades that so many of Hollywood’s war films were set, and the outfit—much like the conical hat—was used lazily to depict Vietnamese women on the big screen. Phuong from “The Quiet American” and Trinh from “Good Morning, Vietnam” both donned ao dai. However, both are surface-level supporting characters. Phuong plays into the tired stereotype of a quiet, subservient yet sexual Asian woman, and Trinh wasn’t even played by a Vietnamese actress. Here the ao dai feels like an easy storytelling gimmick, a visual cue to let the audience know: ‘Hello! Vietnamese girl on screen!’

For a better, more intimate, Vietnamese-centered storyline about the ao dai and its meaning to women and the Vietnamese fashion scene of the 60s as a whole, Chào recommends “The Tailor” (Cô Ba Sài Gòn). With fantastical elements and vibrant scenes, it even features a true-to-life, ASMR-esque ao dai-making montage that’s a pleasure to behold.

The modern gal (1980s – today)
Today, this national tunic has seeped its way into the nation’s heart for both special occasions – in pre-wedding ceremonies, brides and their maids sport glamorous ao dai gowns – as well as in our everyday lives. These days nothing seems too unorthodox or off-limits. No longer confined to rigid rules and structures, the ao dai is free to embrace whatever creative liberties that come along. Politics aside, Vietnamese women just love wearing an ao dai.

“On the rare occasions that I wear it, I unconsciously carry myself with more poise and elegance. I seem to be more soft-spoken too,”

A case in point was on a recent beautiful late-autumn afternoon when I and a few of my girls arranged an impromptu ao dai photoshoot–the excitement in the air at the very thought of wearing our favorite ao dai (most girls own at least one) outside of the Lunar New Year was palpable. We were dolled up in no time. What was noticeable was that this group of young Vietnamese 20-somethings all had very different ao dai, perhaps reflecting the diversity of the nation today.

One of us preferred the simple, innocent touch of the white gown, which since the 1980s has been the official uniform Saigon schoolgirls (the same style as worn by the much-maligned Miss China.) I find myself drawn to the more old-school silhouette with its colorful décor. Though stunning, I feel it ages me a good decade. It is the preferred style of middle-age women, who can be seen wearing them and posing for photos in their own girl gangs by Hoan Kiem Lake.

Another of us preferred the complete opposite of the spectrum, with her modern boat neck and shorter hem, though she went with a post-modern twist by topping it off with skinny white jeans and sunnies. The outfit is nothing if not versatile.

Quyen, a Hanoi-based seamstress who is almost 80-years-old has been making the gown for the best part of 65 years, which makes her one of – if not the most experienced ao dao tailor in the city. “Once you get the basics of the bodice down, you can do whatever you want with the rest,” she says. “Change up the neckline, a shorter hem, a looser fit. Anything! However, I think it looks best when you don’t stray too far from the classic look.”

Indeed, Quyen has seen as just about every ao dao fad around, and knows a thing or two about this particular outfit. “It unveils not an inch of the body, yet reveals everything,” she says of its juxtaposed sensual allure, and we wholeheartedly agree.

“On the rare occasions that I wear it, I unconsciously carry myself with more poise and elegance. I seem to be more soft-spoken too,” says Van Nguyen, a student attending Vietnam National University.

Wearing this classic seems to tap into the hidden traits of traditional Vietnamese beauty in us all. Weaved into the fabric of the nation, no matter how much the ao dao changes, it will no doubt continue to be the defining fashion item of Vietnamese womanhood and style for many years to come.