The names behind the Hanoi streets: Nguyen Trai 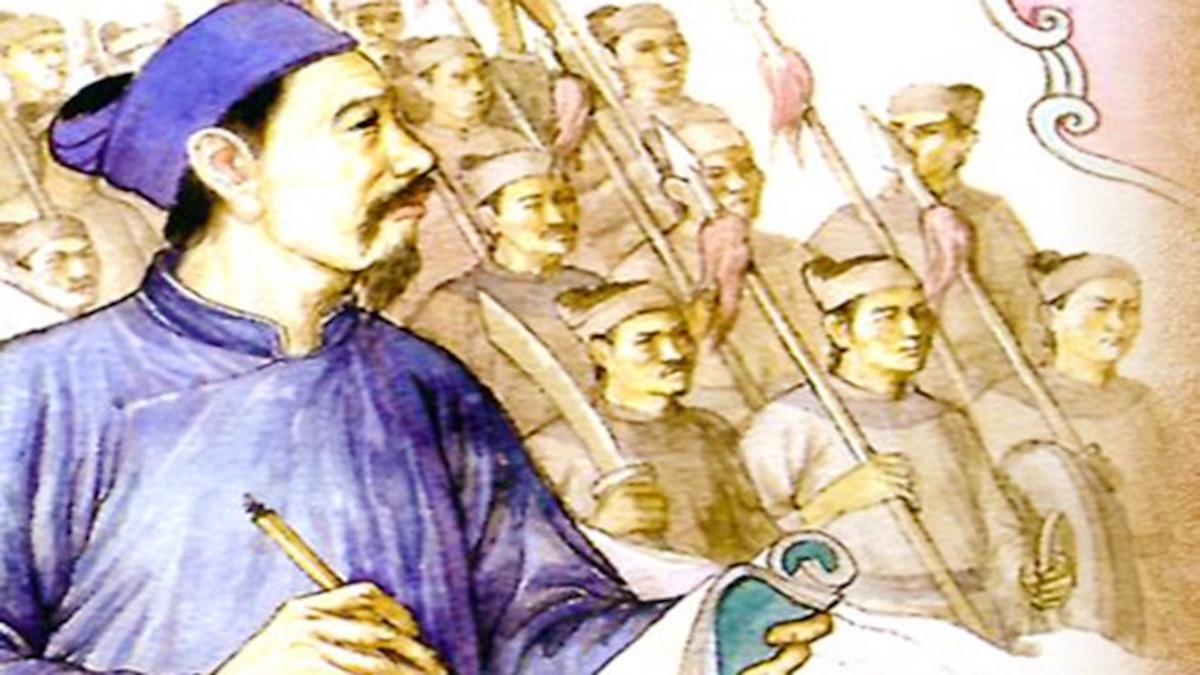 “Our Great Viet is a country where prosperity abounds. Where civilization reigns supreme. Its mountains, its rivers, its frontiers are its own; its customs are distinct, in North and South.” – Nguyen Trai.

If you are looking for a place to train your patience, or simply want to kill time and enjoy the warmth of hundreds of people and vehicles stuck in endless traffic, Nguyen Trai street in rush hour seems a safe bet. During the past 10 years, Hanoi’s metro has been billed as the plan way to reduce traffic here, but with that constantly postponed, the street’s traffic looks set to stay. The busy road is named after one of Vietnam’s most revered scholars, poets and strategists.

Nguyen Trai (1380-1442) was born in Thang Long (present-day Hanoi) into a family of powerful officials. His father – Nguyen Phi Khanh – was arrested when Trai was young and exiled to China as a political prisoner. Before leaving Nguyen senior told his son: “You are an educated person, and a smart person. If you wanted to be a pious child, I would hope that you would be a useful person to your country. You should find a good way to wash out this insult to Vietnam and avenge my capture. I do not want to see you crying as a woman would. That would not be a good son.”

His father’s parting words had a profound impact on Nguyen Trai. Kicking out the occupying Chinese became a priority, and he soon joined Le Loi’s rebel army and together over a nearly ten year period they organized an uprising able to drive the Ming armies out from Vietnam and liberate the nation from Ming rule, effectively ending the fourth Chinese domination of Vietnam.

“Over the centuries, we have been sometimes strong, and sometimes weak, but never yet have we been lacking in heroes.”

It is likely apocryphal but it is said that Nguyen he helped Le Loi build the rebel army smearing trees the words “Le Loi for King, Nguyen Trai for First Minister,” in grease on several trees.  When ants ate through the grease the trees were left etched with this mysterious slogan and saw it as an omen from god. They quickly signed up with the rebels.

After seizing A glorious victory against the mighty Ming Empire (also known as the Wu Empire), he wrote Binh Ngo Dai Cao (Great Proclamation on the Pacification of the Wu), which is considered one out of three official independence declarations in Vietnamese history. In it he wrote: “Trieu, Dinh, Ly and Tran created our Nation, whilst Han, Tang, Song and Yuan ruled over theirs. Over the centuries, we have been sometimes strong, and sometimes weak, but never yet have we been lacking in heroes. Of that let our history be the proof.” The document is seen as such an elegant and profound document that it is taught in detail in Vietnamese high schools and middle schools to this day.

Aside from being a great strategist that helped kick out the Chinese he was a famed wordsmith, a wonderful poet whose verse is known for its spare simplicity, and honest style:

My fate naturally has many twists and sharp turns/
So in everything I trust in the wisdom of God/
I still have my tongue — believe me, I am able to talk/
Even though I’m still poor and, as we know, pathetic/
Never to return, the past flies too quickly and the time is short/
But, wandering in this cold room, the night is far too long/
I’ve been reading books for ten years, but I’m poor from clothes to bone/
From eating only vegetables and sitting without a cushion.

The claim that his fate was to have a sharp twist, turned out to be prophetic when he and three generations of his family were beheaded after a controversial scandal that has left scholars debating for centuries. Nguyen had an extremely beautiful and youthful wife of outstanding intelligence, Nguyen Thi Lo, who was believed to having an affair with the young emperor Le Thai Tong. During a visit to Nguyen’s estate Le Chi Vien (Lychee Garden) the emperor suddenly fell sick and died. Nguyen clearly had motive and he was fingered for regicide.

Nobody is quite sure what happened at the Lychee Garden. It is a mystery of Vietnamese history that will forever remain unsolved. Some historians believe Nguyen poisoned the emperor in a bout of rage. Others claim the ruler died of a heart attack in a vigorous bout of lovemaking with Lo, and Nguyen was merely used as a cover up. There are the even claims that the whole thing was orchestrated by the emperor’s wife in a fit of jealousy. Whatever the truth, if the emperor, who is sleeping with your wife, turns up at your house and is found dead in the morning, you are likely in trouble. And so it was for Nguyen Trai.

Not that it did him much good, but 20 years later, Nguyen was exonerated of the crime and officially pardoned.

Shortly after Nguyen Trai’s execution, most of his writings were burnt and others strictly prohibited. However, we are still left behind with an extraordinary abundance of writing rangings from literature, history and geography, through to poetry, ceremony and propriety.

Whatever the truth, if the emperor, who is sleeping with your wife, turns up at your house and is found dead in the morning, you are likely in trouble.

Due to his contribution to Vietnamese literature and thought, Nguyen Trai is claimed as one of 14 typical heroes of the Vietnamese nation, a list that includes luminaries such as Hung King, Tran Hung Dao and Ho Chi Minh. Trai has been honored by UNESCO as “World Cultural Celebrity.” Indeed, you can find the admiration for the legend around the world, even in the centre of Quebec, Canada, where a Nguyen Trai monument can be found in the Parc de L’Arti Lerie.

So the next time when you are struggling in the middle of a long-lasting traffic jam on Nguyen Trai street, spare a thought for this illustrious Vietnamese Confucian scholar, master tactician and national hero who played a key role in ending a period of Chinese rule over Vietnam, and only to be executed for a crime he likely did not commit.