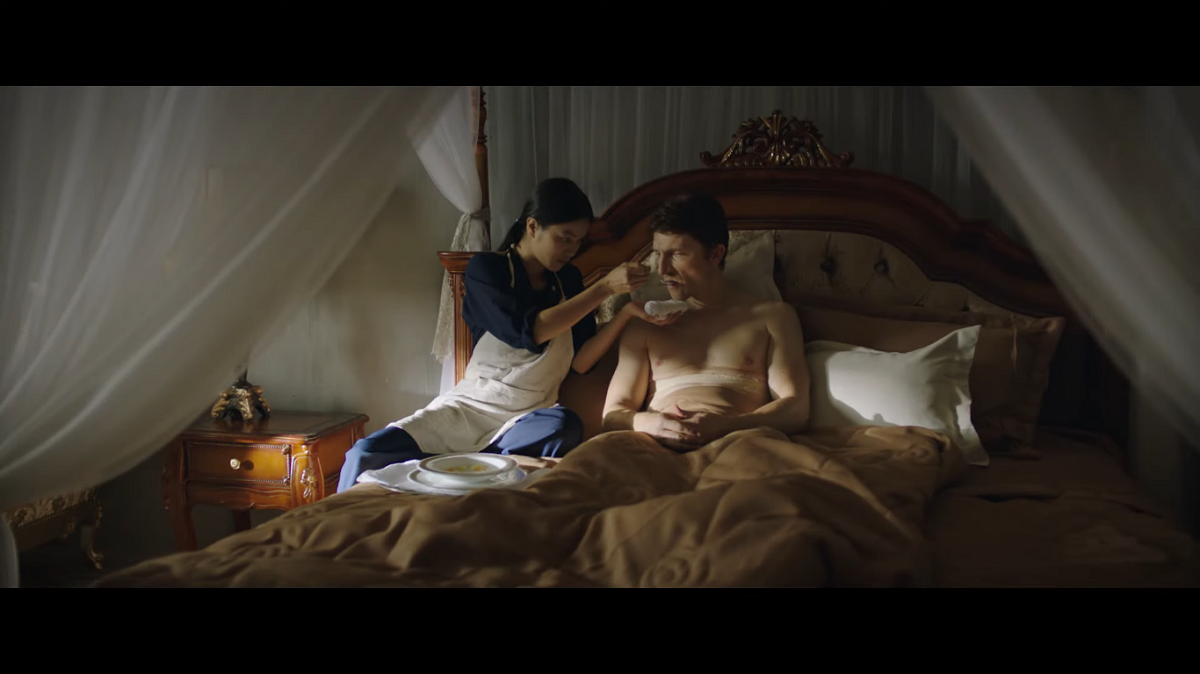 Also known as Cô Hầu Gái, “The Housemaid” is a Vietnamese take on gothic horror that swaps the grim British manor for a dank French rubber plantation. Released in 2016, the film is set during the backdrop of the First Indochinese War. Linh, the orphaned protagonist, is hired as the titular housemaid at the infamous Sa Cat plantation, a sprawling estate haunted by tortured spirits and sins of the past. At face value, the film is a schlocky ghost story with no real scares. However, the historical themes touched in the film elevate the imperfect “The Housemaid” to a sharp rebuke of French colonialism in Vietnam.

The biggest obstacle horror fans will have with the picture will likely be the lack of genuine frights. Director Derek Nguyen is able to craft a spooky atmosphere in specific scenes but that does not necessarily translate to effective terror. The moody colors, eerie lighting, and slow, tension-filled camera pans gives the appearance of a passable ghost movie. Unfortunately, the film is riddled with unimpressive, poorly-timed jump scares. Supernatural appearances are undercut by bombastic, orchestral beats. While the creature designs of the various ghosts and zombies are interesting, their lackluster depiction will leave audiences unmoved and wanting more.

However, the film’s second act picks up a bit as the genre shifts from gothic horror to romance. Linh catches the eye of Captain Sebastian, played by French actor Jean-Michel Richaud, who is racked with guilt. As the owner of the Cat-Sa plantation, Sebastian oversaw the deaths of his wife, child and countless Vietnamese workers as a result of enforcing colonial rule. Despite his remorse for his failures as a colonizer, Sebastian does nothing to dismantle the oppressive system that terrorized the Vietnamese. He feels guilty but still profits from the exploitation of others. Thus, he is haunted by the cruelty of his own past.

In order to assuage his guilt, Sebastian falls in love with Linh and promotes her from lowly housemaid to lady of the house. While a seemingly nice gesture, the action is incredibly selfish. Rather than put an end to the plantation’s abuse, Sebastian instead uses Linh to replace the memory of his dead wife and scores of dead Vietnamese workers. This leads to an intense, sharply-edited scene, in which Sebastian confuses Linh for the ghost of his wife, causing him to choke Linh and scream at her to stop haunting him.

Ultimately, the film ends with a satisfying twist (spoilers alert). Linh is not a random, innocent woman, but the daughter of two Cat-Sa workers who were lynched by the plantation’s cruel overseers. Linh returns to Cat-Sa to kill the overseers and Sebastian, avenging her parents’ untimely deaths. In order to carry out these grisly murders, Linh adopts the ghostly figure of Sebastian’s dead wife, to make it seem as if the ghost commits the murders instead of herself.

The twist is reflective of how colonialism creates its own metaphorical ghosts. As previously mentioned, Sebastian would rather redo his failed marriage with Linh than make systemic changes. Linh even points this out to him- “I feel as if history is repeating itself.” It is Sebastian’s refusal to stray from his colonial habits that allows for Linh to take her revenge.

As Halloween approaches, consider “The Housemaid” for some seasonal spookiness. Despite the lame jump scares, the film uses the gothic horror genre to illuminate the real-life terrors of colonialism.

While the film itself is not too terrifying, its actual, historical inspirations are extremely frightful. Director Nguyen, who also wrote the film, certainly did his research before filming “The Housemaid.” In an interview with the Saigoneer Nguyen admits to having both a personal and academic interest in the subject.

“The film was inspired by the life of my grandmother, who was a housemaid during the French colonial period in Vietnam,” he told the website. “Although the script is fictional, my grandmother’s story and these events naturally came together to depict the turbulent time in Vietnamese history.”

In addition to his grandmother’s stories, Nguyen furthered his research into French colonialism by reading Tran Tu Binh’s “The Red Earth: A Vietnamese Memoir of Life on a Colonial Rubber Plantation.”

“The memoir tells the story of one of the 17,606 laborers who worked at Phu Rieng plantation in 1927,” Nguyen says. “These indentured servants worked under debilitating and inhuman conditions, where merciless overseers systematically beat and tortured them, many of them to death. Many of the workers tried to run away. But the ones who were caught were often hanged, raped or left to starve in cages. These accounts really inspired the horror aspects of the film.”

Since its release, “The Housemaid” has received some international attention, including from Hollywood. Screenwriter Geoffrey Fletcher is tapped to rewrite the script for American audiences. However, instead of a Vietnamese setting, Fletcher’s version will take place in the deep South, directly after the American Civil War.

As Halloween approaches, consider “The Housemaid” for some seasonal spookiness. Despite the lame jump scares, the film uses the gothic horror genre to illuminate the real-life terrors of colonialism. Hokiness aside, the film is steeped with tragic history and passionate drama, making for a good viewing- sans any genuine frights. While not terribly scary, the colonial tensions will linger in the minds of audiences, haunting them like the ghosts of Sa-Cat.

The names behind the Hanoi streets: Nguyen Trai