Why Vietnamese love to study abroad 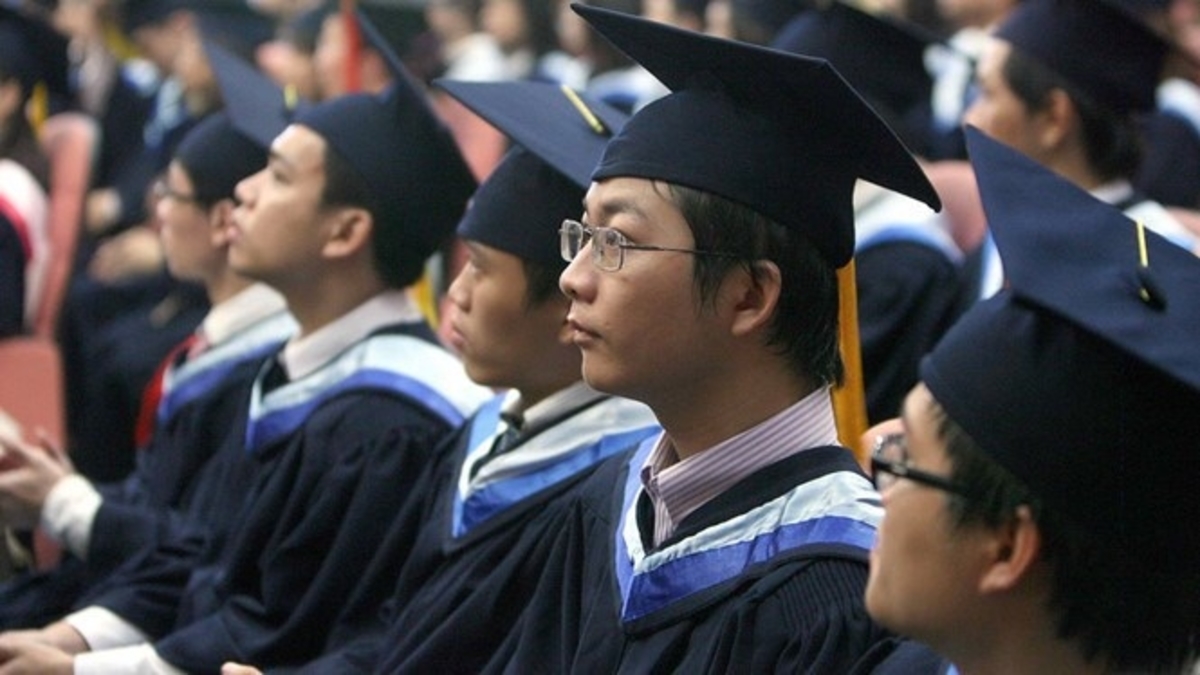 With autumn soon to recede into view, Vietnamese high-school seniors throughout the nation have been entering a most competitive battlefield: college applications. For many years, heading West has been a trend in Vietnam, with students eager to do a stint in U.S., U.K, or Australian schools. Families that have the financial ability will do whatever it takes to send their children abroad. Famed international schools in the capital such as Concordia, UNIS, and St. Paul as well as top Hanoi public schools pride themselves on the high numbers of students (both Vietnamese and foreign) they send to the very best universities in the world.

Studying in the United States, in particular, has always been wildly popular in Vietnam, with the number of Vietnamese students enrolling in U.S. universities increasing for eighteen years straight, according to Forbes Vietnam (though this year there will be an inevitable Covid-related dip).

Events like the annual International Education Week hosted by the U.S. Embassy in Vietnam and EducationUSA are held to promote learning abroad. In the 2018-2019 school year, there were a total of 30,000-plus Vietnamese students choosing to study in the United States, with 80% enrolling in universities. However, studying in America comes at a huge financial cost. The average tuition at a private university is about 35,000 U.S. dollars per annum, according to U.S News. Some, like renowned Yale University, have fees of almost 60,000 U.S. dollars for the 2020-2021 school year, with Vietnamese overseas-students contributing approximately 1 billion U.S. dollars to the American economy. Since 2015, Vietnam has been in the top six countries with the most students studying in the United States (China and India are first and second respectively). Unquestionably, education stands as a vital pillar of the Vietnam-U.S. relationship.

But just what is it that makes an American education so seductive to the students of Vietnam? We sat down with several students from Vietnam to find out the allure of chasing the American dream.

Tien Tran, a student at the University of California, who attended the British International School Hanoi where he served as the school’s Head Boy, told Chào that gaining new experiences, meeting new people, and looking at things from new perspectives was a major draw: “The aspect that drew me in the most was the unmatched diversity in majors, learning environments, and backgrounds and experiences of students and teachers from all over the world.”

The emphasis on a diverse education is something that comes up time and time again as the chief benefit of a U.S. education. Besides lectures, American colleges are particularly strong with letting students participate in various community events, utilizing modern facilities to aid their research, opening up internship opportunities, as well as creating a space where students can experiment with topics unrelated to their majors. Whereas in Vietnam, schools tend to lean more on academic education alone. Students are focused on grades, turning in assignments, projects, and many universities do not even have campus dorms, limiting community events. Aside from diversity, there is a general idea that the standards and facilities are simply better abroad.

“At the end of 10th grade, my parents wanted me to go to the States because they thought that would better prepare me to apply to the universities there. So yes, it was my parent’s idea. I was very stressed out at the time because I just entered 10th grade, and didn’t feel like I was ready. But lucky for me, it turned out to be a good idea because I really like it here,” says Oliver Luong, a student from Saigon who is now a senior at Northfield Mount Hermon High School, a boarding school in Massachusetts. “In America, I am allowed to explore so many more things than I was in Vietnam. I’m exposed to different cultures, religions, political views and global issues. I also got to travel a lot in America. The country is huge and every state feels different.”

Whether born in the mind of the parents or child, most agree that fleeing the nest for a stint abroad has considerable merit. Yet, studying in the United States can be stressful, scary even. You are halfway across the world, living independently, immersing yourself in a culture that isn’t yours, taking classes in a language that is not your mother-tongue – understandably, one might struggle. At the start students particularly struggle with time management. One has to balance school time, sleep, work, keeping themselves healthy, leisure, and sometimes even part-time jobs.

I am a Vietnamese teenager studying abroad myself, and during my first semester in America, everything was new and exciting; I got pulled into the realm of making new friends, attending every local event I could, trying all the nearby restaurants–in the end I couldn’t balance my workload. I would often stay up late at night and cram essays a couple of days before the deadline (I suppose I am not the first in this!), so what I produced wasn’t always best of my ability. Though, it didn’t take me too long to find the balance and be able to keep up with the fast pace, and overwhelming life in the United States. Another thing I had to get used to was the weather. Growing up in a tropical country, I had experienced sub-zero temperatures. Getting to see snow for the first time was exciting at first, but afterward it was inconvenient, wet and slippery. Staggering cost aside, studying abroad is not for everyone.

College applications can be really tough on Viet students. There are multiple requirements: profiles, standardized tests, transcripts, personal statements, supplemental essays, recommendation letters, and sometimes an interview. All are taken into consideration when the school assesses if a student is a right fit for them. Sometimes, we need to just take a break and forget about it for a while.

“I wrote about the challenges I faced as a Vietnamese teenager going to church while living in a Buddhist-influenced household and how I never truly felt like I belonged,”

For Tran, getting the application out of the way was a reason for celebrating; though he started a little early. “The night of the deadline for UC Schools, my friends and I decided to get a barbecue together to de-stress. It was all worth it until we got screamed at by our college counselors for ‘wasting time’ while our important applications weren’t even finished!”

One benefit of the U.S system is that it does not exclusively look at test scores to judge a person, American colleges seek well-roundedness of their students. In Vietnam, if your standardized test score is above the benchmark of the school you picked, you are automatically accepted. But a single test score does not say anything about a person’s ability; similarly, a GPA does not reveal one’s passion and ambition. As someone who is not the best at test-taking, I definitely took advantage of the supplemental essays to impress the admission officers. I wrote about my interest in stem cells, my passion for helping others, and things that made me who I am today. I believe that the genuine nature of these essays helped me stand out, though it can be difficult as it is tough to prove one’s potential in two pages.

Mai Nguyen, a student at Concordia International School in Hanoi, decided she needed to make her statement as personal as possible, so she used her statement as a chance to open up about herself: “I wrote about the challenges I faced as a Vietnamese teenager going to church while living in a Buddhist-influenced household and how I never truly felt like I belonged,” she explained. “The faith I thought would divide my family, instead, united us. In my essay, I didn’t focus on my faith but rather on how it changed me as a person. I became a much more free-spirited, responsible, and loving individual. I honestly never acknowledged these changes until others pointed them out to me.”

Choosing a major can be a particular challenge with students faced with a list of subjects they may never have encountered before. Luong’s interest in finance came about when he came across a stock competition at the Wharton School of Business. He was immediately drawn enthralled: “I find exploring the factors that influence the prices of things fascinating, and at the same time, am intrigued by the venture capital market. So I decided to major in finance.”

For Tran, who is pursuing a business major when he is not throwing late night barbecues, attending a renowned institution with a heavy-hitting reputation was key, as he felt this would help him when applying for jobs later on. “UC Berkeley’s Haas Business School proudly stands at number three in the ranking for the undergraduate business programs,” he says. “Being in a large school with a lot of highly recognized programs in various fields will allow me to explore my various interests.”

When people say the application process is stressful, it is. I scrapped my Personal Statement and switched topics too many times before the final draft. I felt like I had drained all of my creativity. Students should not underestimate the stressful nature of the application season and be prepared to take a few months out of their lives to grind. I think it is important to start early: begin to study and take the standardized exams during your junior year, start drafting your essays during the summer so that your workload won’t be overwhelming when you enter your first semester of senior year.

However, it is important that students give themselves a break. Stressing out too much will not increase your test scores or make your write better essays. It is key to know how to allocate your time so that you can find a balance between work and leisure.

There are many challenging aspects that come with moving abroad: applications, stress, and competition to name just a few. But a new environment allows students to move outside their comfort zones to learn, explore, have fun, challenge themselves, and take risks.

Being in America means trying new, American things you might not often get in Vietnam. For some it might be their first time celebrating Christmas, trying apple cider, or simply taking the subway, for others it is perhaps the simple joys of going on Spring Break adventures without their family. For me, it was getting used to taking long flights to the point where I can sleep on almost any plane journey, doing my own laundry for the first time, and having a stranger as my roommate (she ended up being my really good friend). A few years of studying abroad offers myriad opportunities; it is up for the young students to make the most of them. We wish the best of luck to the class of 2021.

Vietnam’s storms of the century