Hanoi's communal housing areas give a taste of Vietnam past 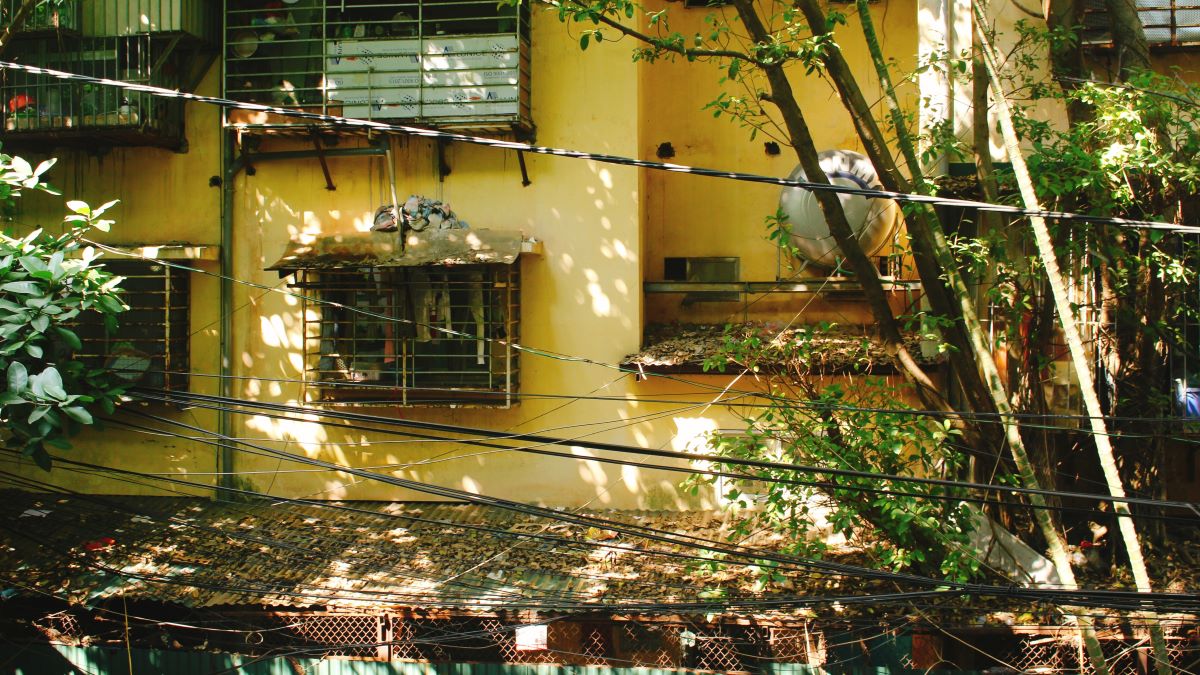 Occasionally when walking down a busy Hanoi highway, you take a wrong turn and it feels like you have slipped back in time. Suddenly you cannot move for electric cables crisscrossing the street. Toothless old men are selling old parts for bicycles-models you have never seen, and smiling Vietnamese women in conical hats sell bits of kitchen hardware or wring the necks of chickens and let the blood slowly drip into buckets. It could be 1961, not 2021. These neighborhoods are called khu tap the (collective districts). And they are scattered across the Vietnamese capital, like little memories of times past.

These communal tenements were built with socialism in mind. After Vietnam defeated their French colonizers in 1954, there were less than a dozen registered architects in Hanoi, all trained in France. So the country set about employing a new Soviet-trained group of architects, and it was under the principles of communal living that these idealist neigborhoods were created. Between 1958 and 1990, over 30 khu tap the were built in the Vietnamese capital. The total area of these complexes totaled 4,500,000 square meters, almost equal to the entire city center.

One such neighborhood is Kim Lien, a small quarter located in the south of the city, close to Thong Nhat Park. It’s home to one of the the oldest communal housing areas in Hanoi. Kim Lien was named after the childhood neighborhood of President Ho Chi Minh, Indeed, it was Uncle Ho who had been inspired to set up about rebuilding the capital under socialist principles.

“Hanoi and Haiphong may have been destroyed to the foundations, but when we achieve the final victory, we will build them back even more spacious, larger and more beautiful,” he said of the plan.

On arrival in Kim Lien, you are immediately hit by the contrast of these ramshackle aged buildings with the more modern high glass and concrete buildings within view: hotels, banks, tower blocks all glaring in neon lights. The communal homes found in this part of the city are particular to Hanoi, their yellow stone style is specific to the capital, though similar housing can be found in other large Vietnamese cities.

These days many of the ‘group homes’ are being torn down to leave space for more contemporary buildings. A line of communal apartments on Giang Vo street was destroyed about six years ago, and now sparkling new businesses and residencies exist instead, with the local character of the area lost due to the ravages of modernity. Many of the locals were upset that the communities were being torn down.

“Having to move to a new urban area is unfair for us. Schools, kindergartens, hospitals, markets—everything we need is nearby, unlike in places we are supposed to relocate to,” one Giang Vo resident said at the time. “Some residents are running their small business here. They have no idea what items they can sell there. They will become poorer. We don’t want to be dependent on the government’s little subsidy. Our neighbors know each other well, take care of each other, and share the cost for common problems. This community bond will be broken up.”

Kim Lien community is like a small labyrinth of little alleys intertwining with each other, every few steps a new discovery unfolds, whether it a communal yard (and there are lots of these), a tiny noodle restaurant, a gaggle of students doing homework, or even a Ho Chi Minh statue.

“Our family is very big, so we moved to Kim Lien. I like the life here.  People around here are so thoughtful and kind–they care. But what I’m afraid of most is the dysfunction of the drain pipes… constantly,”

On our wander though this closely bonded community, we meet Mrs. Lan who is cooking soup at a ground floor store. Recognizing, we are strangers to neighborhood, she calls us over and asks us if we need anything. We learn that Lan, in her mid-sixties, bought the place over a decade ago, and opened a little chicken noodle restaurant in it during the coronavirus epidemic to make some extra money. She chats away happily telling us bits and bobs about the character of the area.

“Our family is very big, so we moved to Kim Lien. I like the life here.  People around here are so thoughtful and kind–they care. But what I’m afraid of most is the dysfunction of the drain pipes… constantly,” she tells us.

These old buildings, which look so pretty from the outside, are littered with problems from top to bottom, after years of wear and tear. Residents are perpetually engaged with renovations and repairs. The drains are a particular problem (we are told this several times). Such issues are far less common in the surrounding private buildings. The renovations and buildings here make for an almost constant, banging, drilling and hammering. But where in Hanoi is free from such noise?

“There were hard times. I remember back in the day 40 years ago when were really poor and there was only one fountain for the whole building; we had to go and collect the water, carry it to our apartment, and basically everyone needed to save water to the maximum possible,” a female resident in her 50s says.

There’s lots of commerce here, but mainly simple things: baskets of fruits, tupperware boxes, nuts, Tet decorations, a few plants, meat skewers and, of course, a small shop selling bia hoi, the country’s renowned fresh beer. There are people running small stores, but many seem more content with snoozing the day away than anything else.

All the neighbors form a close, tightly-knit community, a big family almost, often engaging in group activities, be it morning exercise, cleaning the common spaces such as stairs and halls, and managing the buildings together, whilst children roam around and gather in a neighborhood playground. There are no building managers here. But it’s still safe as ever, to the point that many here leave their doors open, their shoes and bikes outside.

“The camaraderie here is stronger and sweeter than in today’s modern block buildings where people stay in their box and don’t talk to each other so much,”

The close connections formed in and around the buildings are much valued, and there are often local weddings, which see the whole community get involved. When people fall sick, neighbors quickly visit. Time seems to have stayed still here. And it seems that it has been like this since the buildings were first built, about 60 years ago. The tenements have deteriorated over time, but not the lifestyle of the many generations that occupy them. They residents mostly didn’t choose to live here, but they say they are happy all the same.

“We can count on each other, and borrow things as we need, from something small as salt, to fans in the summer. We take turns taking care of the little ones. The camaraderie here is stronger and sweeter than in today’s modern block buildings where people stay in their box and don’t talk to each other so much,” another resident tells us.

The people here seem in no rush to move on, instead preferring to gently go with the flow of life and where it takes them. Here we can see the hidden hustle bustle of lives lived–lives that that you might only discover if you dig deep into the heart of our busy, yet beautiful capital.