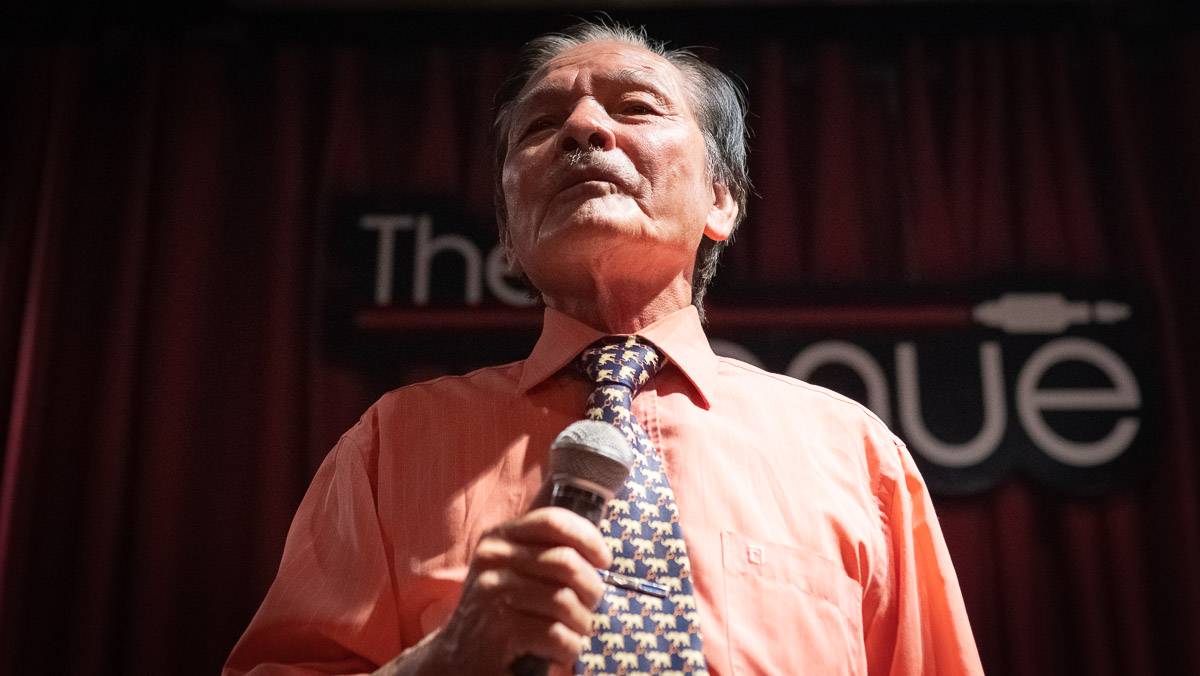 You hear them on the radio in taxi rides. Young men come out of nowhere and belt them out of a solitary microphone and amp, while you gobble noodles on the side of the street. We know these romantic ballads as bolero songs or as the locals call them: nhac tru tinh. Yet the meaning is the same. They are songs about love and they are also what singer Nguyen Van Loc has dedicated his whole life to, songs that he had to spend 10 years of his life in jail for.

In this era hurried era of low-attention, Loc’s undying dedication to these lyrical songs can make him look like a bit of a relic to some. Mustachioed and still handsome despite his age, when asked what love means to him, the crooner’s face fills with mirth. He cannot find the right combination of words to explain this kind of love; it perhaps comes through best in his passion for nhac tru tinh. For this music, he is like a knight to a princess: he fashions himself as one of the last protectors of the art form, a true champion of the songs and their legacy. “Whatever I think is nice or beautiful I will protect it. In terms of my love for music it’s really big and will last for eternity,” he says.

Loc first fell in love with bolero music as a child, a time he remembers as simple and idyllic. He was born in 1945 in a period of relative peace for Vietnam. The war against France had not yet begun. The Americans would not arrive until 20 years later, and according to Loc, Vietnamese love songs were sung freely everywhere. He still remembers his father and others singing them often, while he listened, and it did not take him long to memorize most of them. He loves them so much that it is hard for him to pick the ones he likes best but he recommends a couple. “I have too many favorites. [But] anyone should listen to Suoi Moi by Van Cao and Thu Quyen Ru by Doan Chuan.”

“They beat me and made my life miserable in the prison but I still wouldn’t do it.”

Fast forward 20 years and the streets of Hanoi were still as charming as one would imagine. There was no cacophonous motorbike screeching or horns. People largely got around on foot or by bicycle. Yet, navigating some new laws made things a bit more complicated for artists and music lovers like Loc. Perhaps most surprising of these was a total ban on nhac tru tinh. North Vietnam was three years into the American war and government officials put all focus into the war effort. Only patriotic or “red” songs were permitted. They called for battle and love of the country. “Golden” songs as bolero was called did nothing for fighting sentiments and were banned accordingly.

Yet this fact did not stop Loc and his friends from forming a small band dedicated to singing covers of the beloved songs from their childhood. The trio performed privately of course, at home and for a few friends and family only. “People told me I had a golden voice so they nicknamed me Loc Vang,” (which loosely translates as lucky fortunes).

However, closed doors were not enough to keep the secret away from authorities who soon found out and in 1968 arrested Loc and his bandmates. Loc was sentenced shortly thereafter to a hefty 10 years in jail. Little did he know at the time, but in a way his sentence would actually be even longer than that.

Loc cannot forget his time in prison, yet recalls it as a time of perseverance and when his love for nhac tru tinh was truly tested. “During the 10 years the government tried to get me to change my mindset and they tried to force me to sing the “red” songs but I did not obey. They beat me and made my life miserable in the prison but I still wouldn’t do it.” Then, and now, Loc insisted that the songs are a significant part of Vietnamese culture and that they should not be forgotten. He is also simply enamored with the song’s themes. “The songs are about love for people, nature and the nation. They have nothing to do with politics.”

As fate would have it, his undying belief in all things love would prove to be worthwhile, and upon his release he found that the young actress he previously dated remained unmarried. She had waited for him. They reunited, tied the knot and had two children, the oldest of which teaches jazz guitar at Hanoi Music Academy. Loc is proud that a bit of his legacy lives on through his son and, like many fathers, is not afraid to use hyperbole when describing him: “I am really proud of him. He is the number one guitarist in Hanoi.”

Although Loc has been rewarded, his life has not been free of sacrifices. After being released, he was stripped of his citizenship for four years. This made it impossible for him to find work and so he turned again and again to the only thing that has always sustained him – his music. After three thwarted attempts to open a cafe for live bolero music, he finally succeeded.  “It [prison] changed a lot of things in my life. I was a truck driver before but I lost everything in terms of my career and I had to start from scratch,” he says. “I started with blue collar jobs working in construction. I tried to open a cafe three times but each time they were banned by the authorities. I’ve had to sell my house and all of my belongings to serve my passion.”

His last attempt to open a cafe stuck however, and it is aptly named Loc Vang Cafe. There, he and other singers keep the songs of the past alive in an effort that he and fans recognize has been no small feat. When asked how he wants people to remember him when the time comes, Loc is defiant. “I am very confident that I’m the most dedicated person to this type of music while the government has tried to make it vanish. Everyone was so afraid and didn’t have the nerve to stand up and protect this music yet I was the one who stood up and protected it,” he says. “I’m the last person to protect this music and since the government is praising the music now, my story is out and a lot of newspapers from around the world have asked for my story. As long as the music lasts as will my reputation. If it vanishes, the same goes for my legacy.”

Yet Loc’s story is not dead. He still performs every Saturday at the cafe on An Dương. There, he takes to the stage in a salmon dress shirt and tie. They offset the plum red curtains behind him. His voice pours out into the warmly-lit scene where mostly older onlookers sit quietly transfixed. The venue is long and cavernous, supported by thick wooden beams. It feels like being in the lower deck of an old ship. Loc serenades us with his rich, deep voice from its helm. The final note is lasting. Everyone applauds.