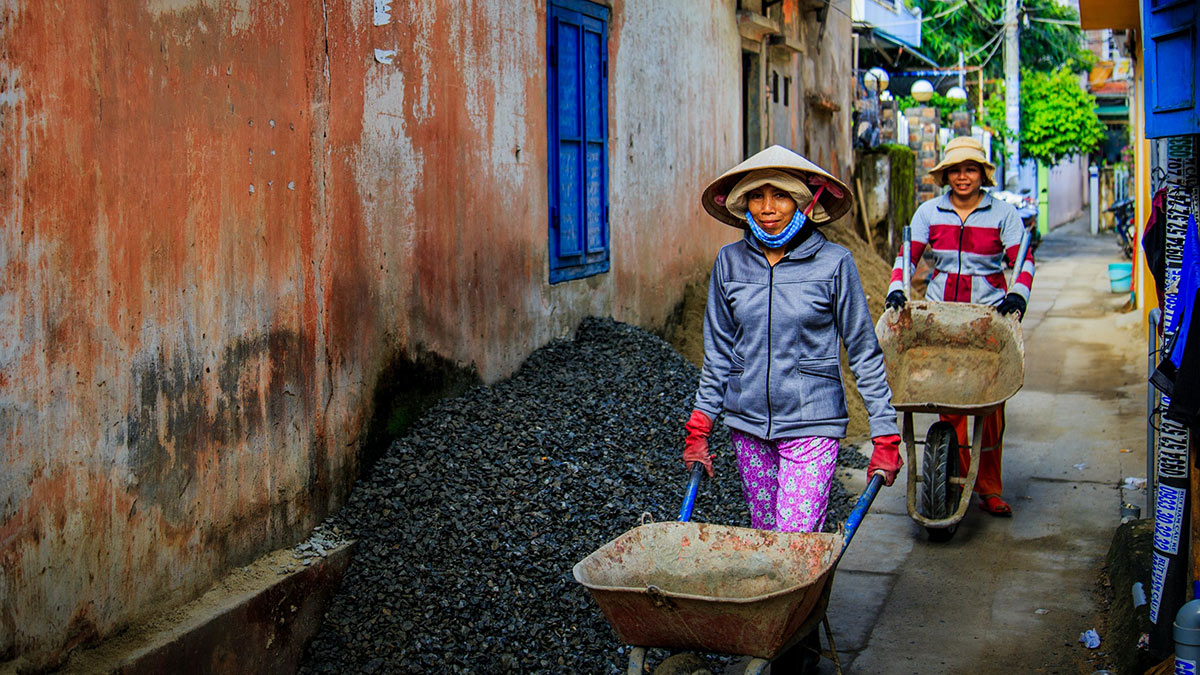 As schools and businesses reopened after the Reunification Day and International Labor Day Holiday, traffic congestion in major cities such as Hanoi and Ho Chi Minh City also returned on Monday morning at the beginning of the work-week. The scene is a stark contrast to several countries around the globe that are in lockdown in a bid to control the spread of Covid-19.

Vietnam lifted its social isolation measures at the end of April 22 but continues to take precautions by limiting the gathering of people and making face mask wearing mandatory. The country has reported 271 cases of Covid-19 as of May 5, with no deaths. Vietnam has managed to achieve this feat by aggressive contact tracing, testing, mass quarantining, timeliness, and the efficient mobilization of state agencies.

Vietnam recorded its first two cases on Jan. 28 on flights from China, it then suspended all flights from mainland China on Feb. 1 followed by all international flights on March 25. Visas and visitors were also stopped to contain the spread of the pandemic. All this seems to have paid off, as Vietnam learned and drew from its experience in dealing with the SARS virus in 2003.

With other countries including Singapore and Malaysia reporting cases in the thousands and continuing various forms of lockdowns, Vietnam has done well to weather the storm compared to its peers and other developed nations.

Nevertheless, like other countries hit by Covid-19, Vietnam’s economy has also suffered significantly over the course of the outbreak. It’s GDP fell to 3.8 percent in the first quarter of 2020, as compared to 6.8% in the same period in 2019 as per the General Statistics Office of Vietnam (GSO). In the first three months of the year, almost 35,000 businesses went bankrupt – the first time in decades the number of companies shutting down was higher than newly registered businesses. The International Monetary Fund (IMF) has also projected that the economy will expand to only 2.7% this year.

However, the Asian Development Bank (ADB) has forecast Vietnam to be one of the fastest-growing economies in Southeast Asia despite the impact of Covid-19. In its Asian Development Outlook report 2020, it reiterated the country’s economy will bounce back to 6.8% in 2021, provided the pandemic is contained.

To help recover the economy, the government has launched a 10.8 billion U.S. dollar credit support package, lowered interest rates, delayed the payment of taxes and land use fees for several business lines. It has further issued financial assistance for employers and employees affected by the pandemic.

The World Bank has further stated that Vietnam’s economy remains resilient and in its report titled East Asia and Pacific in the Time of COVID-19 reiterated that Vietnam benefits from the numerous free trade agreements (FTAs) with labor market conditions favorable.

In this context, we look at key industries important to Vietnam’s economy that are forecast to make a strong come back.

Vietnam’s tourism industry has been significantly affected by the pandemic. Saigontourist – a travel company reported a year-on-year drop of 80 percent in customer numbers in February and 90% in March resulting in 21.1 million U.S. dollars fall in monthly revenues. With practically no international arrivals since March 25, tourism and related businesses have suffered significant losses.

However, while the situation is unprecedented, tourism is expected to rebound faster and stronger. For example, during Vietnam’s holiday weekend from April 30 to May 3, domestic tourism to areas such as Da Lat, Vung Tau, and Mui Ne increased with traffic choked on roads leading out of Hanoi and Ho Chi Minh City. Hotel occupancies were also higher with some transport operators fined for not maintaining social distancing guidelines inside coaches. Savills Vietnam has noted that tourism will fully recover within six months after the pandemic is contained.

In addition, Vietnam relies heavily on Chinese and South Korean tourists, which accounted for 56% of its international arrivals in 2019. This also presents an opportunity, as China and South Korea have largely contained the pandemic. Once international flights resume, it is likely that international arrivals from these countries would first start, helping tourism to recover. If Vietnam is successful in winning its fight against Covid-19 and is viewed as a safe country for travel, tourist number are likely to grow further. The recovery of the industry seems on track with restaurants and coffee shops opening and catering to customers during the holiday weekend.

The pandemic is pushing digital transformation in Vietnam. Banks have slashed online transaction fees to encourage cashless payment, while online grocery shopping and food delivery services jumped in demand. Retailers in Vietnam reported that orders by phone and apps increased tenfold compared to normal days. This allowed retailers to hire more delivery personnel to meet demand. Online shopping also ensures that while there is a dip in consumption, there will always be a demand for products, allowing businesses to operate.

While Vietnam is not out of the woods yet, it has prepared itself in case of a second outbreak. Vietnam can now make 7 million fabric masks and 5.72 million surgical masks a day, while Vingroup has stated that it can produce 55,000 ventilators a month.

In addition, with schools being closed since the Lunar New Year holiday, schools and universities were forced to use online tools and classrooms. This increased the demand for hardware such as laptops and tablets and software services such as Zoom. Experts forecast that online delivery courses will remain prevalent even after the pandemic as attitudes toward e-learning change. Vietnam’s e-commerce industry is still growing but opportunities due to the pandemic have accelerated this shift.

The pandemic forced 15% of manufacturing companies to cut production, with garment and textile industries hit the hardest, directly impacting 2.8 million workers. Manufacturing operators complained of the lack of raw materials for production. Automobile manufacturers such as Toyota, Honda, Hyundai, Ford, and Nissan also temporarily suspended production due to a lack of spare parts and demand. Samsung even flew spare parts and components because of border restrictions during the pandemic.

However, this will also allow companies to have a re-think on their manufacturing and supply chains. Companies will have to diversify their input sources and look at new business lines. For example, several garment factories have realigned their business to produce face masks, which remain in demand. To aid this the government has also removed restrictions on the export of the product. Vietnam has also moved to ship personal protective equipment and test equipment to several countries affected by the pandemic.

Nevertheless, with China containing the pandemic, supply lines are likely to resume, allowing much needed raw materials for production. This should provide businesses a buffer as they look to realign supply chains. Businesses manufacturing in Vietnam are already looking at South Korea, Japan, and India for raw inputs. In addition, countries such as Japan have announced a subsidy program worth 220 million U.S. dollars to encourage manufacturers to diversify their production bases to Southeast Asia which will further help in the recovery of the industry in Vietnam.

Vietnamese airlines have reported that the initial damage due to the pandemic is estimated to be 1.3 billion U.S. dollars. Around 10,000 employees of Vietnam Airlines itself had to take unpaid leave or around 50% of its staff. During social distancing measures, airlines operated a bare minimum of flights in accordance with local guidelines. The Ministry of Transport has proposed to cut several taxes and fees for the aviation industry including a reduction in landing and take-off fees and jet fuel.

Nevertheless, once the social distancing measures were lifted, the number of flights on the busy Hanoi-Ho Chi Minh City increased to 26 from just one previously, with airlines gradually increasing the frequency of flights on domestic routes. In addition, carriers such as Vietnam Airlines and Vietjet have been involved in special repatriation flights. This is likely to continue as more Vietnamese stuck in other countries look to come back to Vietnam.

While it may take a while, the growth of the aviation industry will be linked to domestic tourism and business travel. The signs, however, are promising. Vietnam’s aviation market is one of the fastest-growing aviation markets in the world with major airports reaching capacity. The government knows that the long term growth of the industry is sustainable and has continued working on airport projects such as the Long Thanh Airport, which will replace the present airport in Ho Chi Minh City by 2025.

With Vietnam opening up its economy, it has gained an advantage compared to others as it returns to business. While normal business operations will never be the same, thanks to Vietnam’s recovery, global manufacturers looking to diversify their supply chains will increasingly look to Vietnam.

While Vietnam is not out of the woods yet, it has prepared itself in case of a second outbreak. Vietnam can now make 7 million fabric masks and 5.72 million surgical masks a day, while Vingroup has stated that it can produce 55,000 ventilators a month. Vietnam has also readied new hospitals equipped with the required medical equipment in case needed.

Investors can, therefore, be assured that while Vietnam has opened up its economy, it continues to remain vigilant and ready to meet the challenges posed by Covid-19. The Economist notes that Covid-19 affects emerging economies in at least three ways: locking down their populations, damaging export earnings, and deterring foreign capital. Vietnam has already addressed the first one and remains on course to address the rest.

This article was written by Pritesh Samuel for Vietnam Briefing on behalf of Dezan Shira & Associates. The firm assists foreign investors throughout Asia, with offices in China, Indonesia, Singapore, Russia and Vietnam. Please contact info@dezshira.com or visit www.dezshira.com.